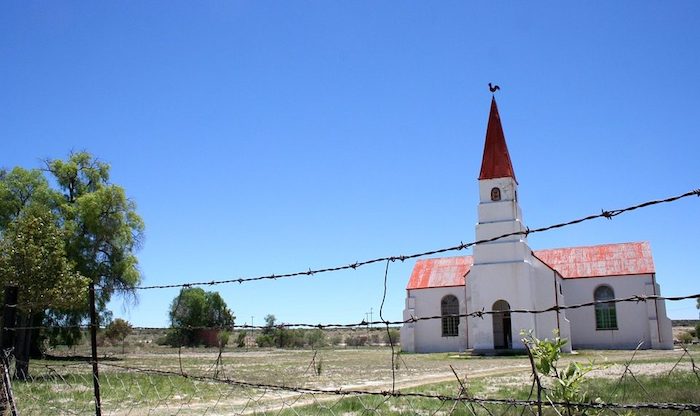 Sam Matiase, a spokesman for the communist front group, Economic Freedom Fighters (EFF), is now demanding that Blacks should also be allowed to steal the land owned by White churches:

Sam Matiase is a spokesperson for the red berets. He has claimed that church land should hold no holier status than that of other lands, whether it’s in a public or private capacity. IOL report his comments also extended to land held in trust by traditional leaders.

The institutions expected to give up their land would include the Anglican Church, the Roman Catholic Church, the Methodist Church and the Dutch Reformed Church.

“All that land must be put under the custody of the state for the benefit of people. Church land should be treated the same way as the land held by private individuals.”

Matiase supported his comments with a tweet on Sunday afternoon. He reiterated that land expropriation without compensation is the only model of redistribution that South Africa could consider.

On Sunday, Carte Blanche took a deeper look into the matter to find out what would mean if claimants obtained the land without the resources to make it profitable.

It’s been disputed that land expropriation would only work if there were dedicated schemes of education for applicants, so they could learn how to properly take care of their land. There are, however, some existing examples of land handovers which feature teaching programmes.

Smithfield resident and farm owner Eddie Prinsloo has negotiated terms with the government to divide his land into seven and provide each one of his workers with their own title deeds. He has put a management and planning schedule in place, for his recipients to learn from:

“It is not true that black farmers cannot farm. They are the best farmers, but we have to educate them and teach them how to deal with management.”

“They need to be taught how to plan, that is what we white farmers have to teach them. Both black and white farmers are important for food security. Let us not underestimate anyone.” – Eddie Prinsloo.

Blacks want it all, and they want it now.  And if the White churches don’t voluntarily give up their land, the Blacks are ready to torture and kill the mostly old White people who care for these properties.  But with all the White farmers eventually gone, there will be no need for White churches — they weren’t built for Blacks, and the Blacks prefer voodoo anyways.