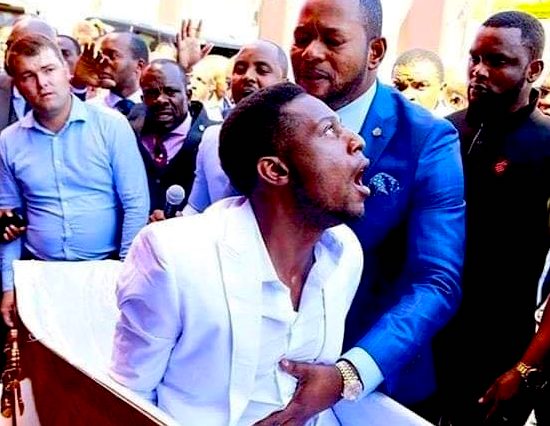 Following the upsurge of rising religious deceit from Black pseudo pastors and religious leaders in South Africa, Cyril Ramaphosa’s government has now taken a decisive step to stop the rot:

A similar situation forced the Rwandan government to shut down more than 6000 churches.

However, South Africa President Cyril Ramaphosa has warned that government will have an interface with churches and religious leaders to stop them from taking advantage of South Africans.

The president has weighed in after a video clip went viral this week showing Pastor Alph Lukau praying over a man dressed in a white suit in coffin.

While Lukau prayed, the man sat up in the coffin while some onlookers gasped.

Ramaphosa says that South Africans need to work together to get rid of bogus religious leaders.

“Those who are doing things that are completely shocking, of trying to hoodwink the whole nation and saying that someone has been raised from the dead, it is actually bringing the name of the Lord, of God and of churches into disrepute.”

Similarly, elsewhere Rwanda, following the huge scam and swindle of innocent People and the spread of so-called churches in the country, forcing members to do unimaginable things for redemption, the Rwanda government led by Paul Kagame has reportedly closed down worship centres to stop the continuing deceit and fraud.

The Blacks of South Africa have a million problems confronting them, and miracle-working “pastors” should not be high on the list, but apparently it is.  Witch doctors still have enormous influence over Black Africans, and in order to lure Blacks into following a “Christian” pastor, they need to incorporate a little voodoo into its rituals.  How does this harm them in any serious way?

The communist ANC party has taken advantage of poor, ignorant Blacks in South Africa far more than their colorful “pastors” have.  Recently, a high-profile Black pastor was attacked for suggesting that the ANC keeps control of Blacks by continuously blaming Apartheid, which ended 25 years ago, for all their current problems, leaving them hopeless.   But Blacks are just as likely to give up blaming Whites for their problems as they are successfully raising the dead.