Salvini Threatened with Arrest for Protecting Italy Against African Invaders 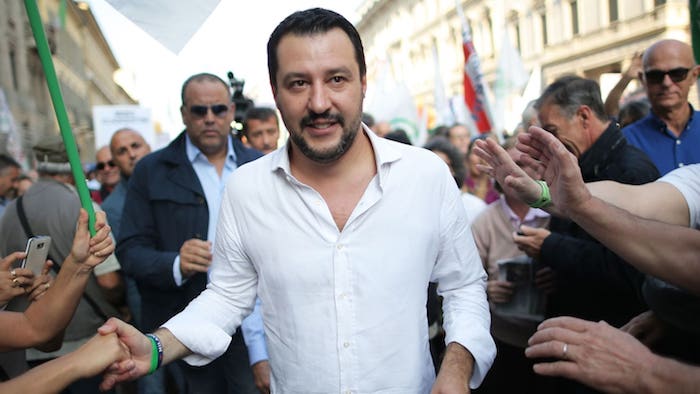 Prosecutors in Sicily are investigating an incident in which a boat load of illegal African invaders was turned away from Italian ports on orders from Interior Minister Salvini, who is being threatened with possible arrest:

Italy’s interior minister remained defiant in the face of Sicilian prosecutors, who have launched an investigation into illegal detention and kidnapping, over his continuing refusal to let 134 migrants disembark at Catania port.

“I am proud if you want to question me and arrest me because I defend the borders and security of my country, and welcome you with open arms.”

Officials began proceedings on Wednesday, and interviewed his staff at the interior ministry in Rome on Friday, before naming Salvini as the official subject of the investigation on Saturday afternoon.

The Diciotti affair has gripped Italy since Monday, when a coastguard ship bearing that name docked in Catania with 177 migrants, predominantly from Eritrea, who were rescued from an overcrowded vessel off the coast of the island of Lampedusa.

Salvini initially insisted that the new arrivals should be taken in by Malta, whose territorial waters they passed, but Valletta refused.

The government then insisted that the migrants would be allowed to leave the ship only if other EU states would accept their quota. So far Ireland and Albania –which is not in the European Union– have agreed to take between 20 and 25 migrants each. Forty-three migrants, mostly unaccompanied minors, women and those suspected of carrying diseases have disembarked at Catania.

No real Europeans want anymore Africans–and Italy has been pushed to the breaking point with the influx of these illegal squatters.

In order to force Africans down Italy’s throat, liberal prosecutors are now resorting to legal threats and imprisonment for anyone who refuses more of these unwanted invaders.

Salvini is Italy’s most popular public figure, and he’s popular because he refuses to cower to political correctness.  What will the nation wreckers in the EU do if more figures like Salvini rise up?

If they don’t want more Salvinis, all they have to do is stop forcing Africans and Arabs into Europe–but that’s impossible because they cannot destroy Europe without massive immigration.