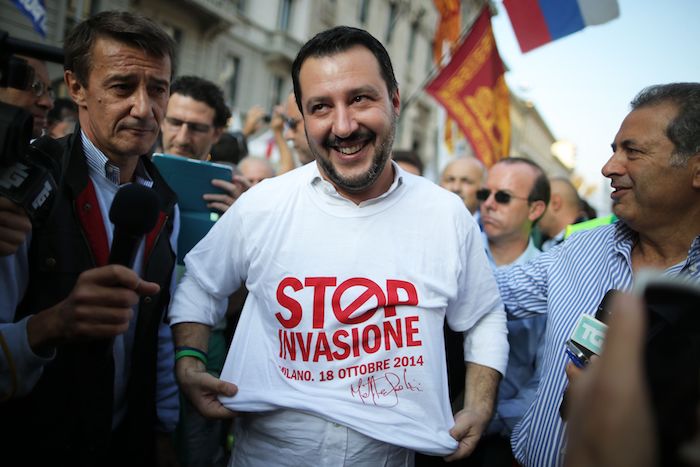 A unanimous vote by the Italian government will put new laws into effect which will greatly deter any African or Arab rapists and criminals from trying to invade Italy — and the rest of Europe:

The Italian government voted unanimously on Monday for a decree that will tighten immigration rules, earning praise from right-wing Interior Minister Matteo Salvini.

“I am happy,” he wrote on Facebook, calling the legislation “a step forward toward making Italy safer.”

The legislation promoted by the interior minister extends the period of detention of illegal migrants to 180 days and sets more strict rules for “humanitarian” asylum, limiting this status to victims of domestic violence, human trafficking, work exploitation, natural disasters and to those in need of urgent medical care.

Salvini said the bill would reduce the financial burden of “excessive” immigration, allow faster expulsions of “fake refugees” and immigrants with criminal records, and strip terrorists of citizenship.

“If you come into my home and deal drugs, I’ll escort you back to where you came from,” the Italian Interior Minister told a news conference, commenting on the decree.

Prime Minister Giuseppe Conte defended the bill, saying it aimed to overhaul regulations on immigration to align them with EU standards, according to the Ansa news agency. Conte argued his government did not plan to send people out overnight but rather to make repatriation process more effective. According to the Prime Minister, there would be “the system of protection”, while the bill simply aims “avoiding abuses.”

Salvini is cutting the jewish-funded invasion of his country off at its knees by these simple legal methods.  He will be accused of “racism” and “Nazi thuggery,” but the Jews have overused those empty epithets, and now fewer and fewer people are afraid of those kind of baseless ad hominem attacks.

The Jews tremble whenever any White world leader mentions “law and order” because it is a signal that the “goyim” are getting angry over their nation-wrecking machinations.  Jews have also come to associate “law and order” with gas chambers, but if the Jews don’t push their agenda too far, it’s likely that Salvini won’t have to use gas chambers to make his country safer.