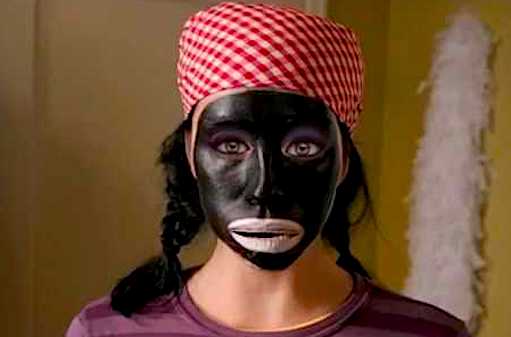 Sarah Silverman, the controversial jewish “comedian,” was fired from a movie the night before it was due to start shooting after a 2007 episode from her show “surfaced” of her performing in blackface:

The offensive sketch saw Sarah say ‘I look like the beautiful Queen Latifah’ before entering a baptist church and proclaiming: ‘I’m black today.’

Speaking on The Bill Simmons Podcast, the 48-year-old said: ‘I recently was going to do a movie, a sweet part, then at 11 p.m. the night before they fired me because they saw a picture of me in blackface from that episode. I didn’t fight it.’

Sarah added that while she understood the decision, it made her ‘sad’ as she’s not ‘that person’ anymore.

The School Of Rock actress said: ‘They hired someone else who is wonderful but who has never stuck their neck out. It was so disheartening. It just made me real real sad, because I really kind of devoted my life to making it right.’

‘That was such liberal-bubble stuff, where I actually thought it was dealing with racism by using racism. I don’t get joy in that anymore. It makes me feel yucky. All I can say is that I’m not that person anymore.’

While Sarah doesn’t stand by the sketch, she called out ‘cancel culture’ on the podcast, saying it has made comedy a ‘dangerous place’ for those who have made tasteless mistakes in their careers.

She said: ‘I think it’s really scary and it’s a very odd thing that it’s invaded the left primarily and the right will mimic it.

‘It’s like, if you’re not on board, if you say the wrong thing, if you had a tweet once … everyone is, like, throwing the first stone. It’s so odd. It’s a perversion. … It’s really, “Look how righteous I am and now I’m going to press refresh all day long to see how many likes I get in my righteousness”.’

Silverman is being rather disingenuous to claim that she isn’t “that way anymore.”  The only reason she said that is because no one found it funny and it could harm her career and income.  If people had loved it and never criticized her for it, she’d be doing it every night in her new routines.  Yet she hasn’t retracted her comments about killing Christ despite being allegedly “threatened” by a “controversial” Christian pastor.  She’s more concerned about how Jews and Blacks perceive her rather than Christians.

And of course she also uses this opportunity to complain how political correctness is destroying comedy, which is true, but she conveniently leaves out the fact that its her fellow Jews who are behind the p.c. censorship.  Jews define what’s funny in America, and if the Comedy Sanhedrin does not find your routine funny, you need to repent.  If she wants to resuscitate her career, she needs to start deifying Blacks while continuing to denigrate Christians and White people.  And her final penance will be to make a Holocaust film in which a Black soldier saves her from the gas chambers.