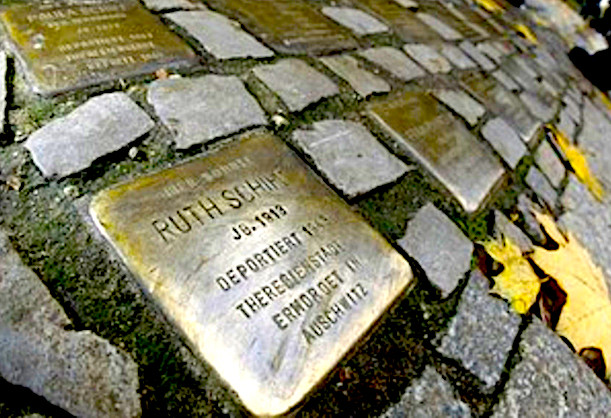 Officials from the Italian town of Schio are doubling down on their refusal to install a memorial honoring alleged local victims of the so-called ‘Holocaust’, after the move prompted predictable knee-jerk criticism from the tiny jewish community:

In an address made late last week, Valter Orsi, mayor of Schio, defended the municipal council’s recent decision to reject a memorial representing citizens of the town who died in Holocaust death camps.

According to Orsi, the proposal was not brought to the town in good faith.

“We do not support political exploitation in our city,” he said, reported Corriere della Sera on November 28. “There is already a plaque for the victims of the camps.”

The installation, proposed by an opposition council member, comes as part of the Gunter Demnig’s “Stolpersteine” art project, which began in December 1992. Each stone, or “stumbling block,” includes a victim’s name, birth year, date of detention and ultimate fate. There are now about 70,000 stones in 21 European countries.

The motion brought before the municipal council called for the installation of a total of 14 stones.

“The fact that ‘stumbling blocks’ have been considered a provocation by the municipal council of Schio represents a shameful legitimization of the attempt of oblivion on the crimes of the regime,” said Noemi Di Segni, president of the Union of Italian Jewish Communities, as reported by The Jerusalem Post.

While some may have opposed the memorial’s installation, Di Segni explained that the council’s move is “even worse than acts by individuals because with this decision Holocaust denial becomes an official act.”

Italian Senator Daniela Sbrollini told the Corriere della Sera that Schio’s officials have “written a bad page for the city” by prohibiting the memorial.

“The city of Schio must have the courage to remember: those who lose their memories lose their future,” she said. “The memory of a profound racial injustice is not treated so coldly. A choice that has nothing to do with the values ​​shared by the large local community.”

Earlier this year, a Holocaust brass plaque was defaced in Rome with a sticker that, in German, read: “Murderers always return to the crime scene.” The year prior, some 20 stumbling blocks were stolen from the city, reported Israel Hayom.

So if the town doesn’t approve of a redundant ‘Holocaust’ memorial, they are obviously ‘Holocaust deniers’, which apparently is illegal in Italy.  So basically the Jews are arguing that it’s illegal not to approve any Holocaust memorial they want to install, or some such convoluted nonsense.

The town rightfully believes that such a superfluous memorial would merely contribute to political divisiveness. Everything Jews do is both political and divisive.

What this article conveniently leaves out is that at the end of WWII, Italian partisans who opposed the German occupation and the Fascist leadership, rounded up many locals in Schio who were merely accused of ‘collaborating’ with the Germans and executed about 50 of them without trial or evidence, in one mass shooting.

Those who perpetrated the executions were arrested and sentenced to death, but none of those sentences were carried out, of course.  A number of the convicts fled to (((communist countries))) behind the new Iron Curtain.

And of course, there were no doubt communist Jews among the ranks of the ‘Italian’ partisans who conducted these executions of alleged “Fascist sympathizers”.  Even the Italian Communist Party (PCI) at the time blamed the executions on “Trotskyite agents“ who worked for the Italian communist newpaper, L’Unita.  And wherever there is a communist newspaper, you will always find Jews of the “greasiest sort”.