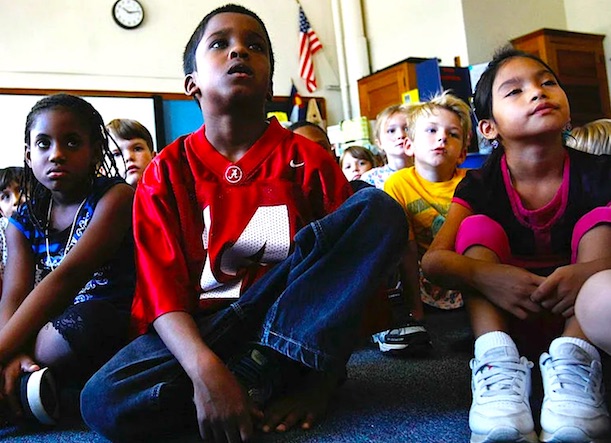 The North Thurston Public School district in Washington State has evidently decided that Asians no longer qualify as ‘persons of color‘ because they inconveniently do not chronically under-perform academically the way Blacks and Hispanics do:

In their latest equity report, administrators at North Thurston Public Schools—which oversees some 16,000 students—lumped Asians in with whites and measured their academic achievements against “students of color,” a category that includes “Black, Latinx, Native American, Pacific Islander, and Multi-Racial Students” who have experienced “persistent opportunity gaps.”

In fact, some indicators might have even shown white students lagging behind that catch-all minority group. Perhaps Asians were included with whites in order to avoid such an outcome. (The superintendent did not respond to a request for comment.)

What the equity report really highlights is the absurdities that result from over-reliance on semi-arbitrary race-based categories. The report also measured “students of poverty“—those who qualify for free or reduced-cost lunches—against non-poverty students, and unsurprisingly found a much more significant achievement gap. Students of poverty perform 28 percent worse on math tests, for instance. That socioeconomic category captures something real and meaningful in a way that the gerrymandered race category does not.

Outside public-school bureaucracies, these kinds of race-based classifications seem less popular than ever. In the 2020 election, California voters decisively rejected Proposition 16, which would have allowed public employees to consider race as a factor in university admissions, employment, contracting, and other decisions. Race-based admissions have been forbidden in the state since 1996, when voters outlawed them via ballot initiative by a margin of 54 percent to 45 percent. Proposition 16, which would have reversed this, lost by an even larger margin, despite receiving enthusiastic endorsements from top Democrats in the state.

This was inevitable — Asians simply don’t behave or perform like typical “people of color” — they have high academic performance, low levels of violence and incarceration, and high family cohesion.

And yet Asians come from incredibly oppressive cultures where “human rights” are virtually non-existent — extreme poverty and slavery is historically the norm in many Asian cultures — and yet they’ve “miraculously” overcome all these “obstacles” (i.e., “excuses”) to out-perform all other so-called “racial minorities” — along with many Whites.

But the very idea that Asians are “minorities” is preposterous — there are literally billions of them on earth, out pacing Whites by a magnitude of ten.

And there are more Blacks on earth than Whites, yet Blacks must always be seen as minorities, even when they comprise the entire population of countries.

Liberals are the most racist people on earth — they have convinced Blacks and other non-Asian ethnic groups that the only reason why they perform so poorly compared to Whites is because of White racism, oppression, and privilege.

If it weren’t for evil Whites “oppressing” Blacks and Hispanics, they would be building and sustaining technologically advanced societies, putting their own people in outer space and curing cancer, as is wishfully depicted in the Hollywood fantasy flick, The Black Panther.

But somehow Asians escaped the “evil” oppression of White racism — even though “Whites” got millions of Chinese hooked on opium, and used them as slave labor to build the railroads.

But despite being a model “minority” group in America, there is certainly a dark side to Asian culture which has held back Asian progress beyond an imitative level — they have mastered reverse engineering but have no inventive spirit of their own.

Ralph Townsend’s 1933 classic Ways That Are Dark: The Truth About China is a must-read for anyone who wants a unique insight into this strange race of people.