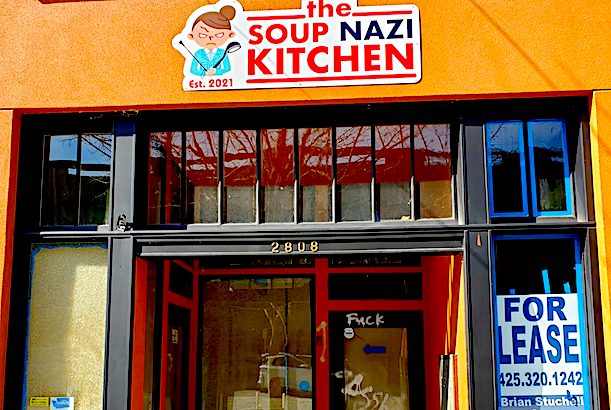 A Seattle businessman — who happens to be Asian — quickly learned that Jews are America’s self-appointed “Humor Nazis” when he tried to name his new restaurant after a famous character from the Jewish sit-com “Seinfeld”:

The restaurant signage went up on Tuesday in Everett, Washington: The Soup Nazi Kitchen, a reference to the famous episode of “Seinfeld” that features the angry owner of a soup eatery.

By Wednesday afternoon, the unopened store front was riddled with pellet bullet holes and spray paint, according to the Everett Herald Business Journal. And owner Andrew Ho, who has a history of controversial opinions, had heard complaints from the small city’s local Jewish community. So he removed “Nazi” from the sign.

The restaurant’s logo featured a cartoonish woman looking angry and holding a whip.

“It really diminishes and makes light of the horrors of the Holocaust,” Rabbi Rachel Kort of Everett’s Temple Beth Or told the Herald Business Journal.

Everett Mayor Cassie Franklin lamented that she could not require the restaurant to change its name.

“The City of Everett is a Safe City and strives to be inclusive and welcoming for all residents and visitors,” Franklin wrote in a social media post on Wednesday. “Unfortunately, recent U.S. Supreme Court decisions have greatly restricted the City’s authority to regulate the wording of signs and largely prohibits the City from banning signs based on the hateful or offensive wording in that sign.”

Ho said he was jokingly referred to as the “juice Nazi” by customers at his previous eatery, the Alive Juice Bar in the northern outskirts of Seattle. He was hoping to play off that nickname and had already printed shirts with the Soup Nazi name on them — which he will not sell, the Herald Business Journal reported.

Oh his blog, Ho added that he wanted to be provocative and respond to “the lockdown and social distancing measures” imposed during the COVID pandemic.

“White supremacy is not on the rise. Nationalism — wrongly conflated with White supremacy — everywhere is on the rise, which is a reasonable response to globalism, the rule of transnational corporations with the US as its private security force.”

Ho has written several other inflammatory blog posts, including a recent one disparaging Dr. Anthony Fauci, and self-published books with titles such as “How to Cook Like a Racist” and “How to look f***able while pregnant.”

So here we are again reminded just how utterly humorless Jews are — despite their claim to being the “kings of comedy” — virtually all those unfunny sit-coms on television for the last 70 years have been written by Jews.

And since Jews invented the Holocaust™, they have proprietary rights about the use of it all terms associated with it — and they are the sole artibers of how those terms are used — and who’s allowed to use them.

If anyone infringes on their copyright and uses any aspect of the Holocaust without their expressed written permission — cleared by their board of directors at the Anti-Defamation League and Yad Vashem Museum — they will have their lives ruined, businesses shut down, Facebook accounts terminated — or go to prison on “terrorism” charges.

Jews have given themselves free rein to mock at anything they want — even the brutal murders of White farmers in South Africa, or the crucifixion of Christ — or negroes in blackface.

But if you even poke fun at any of their sacred cows — their often preposterous “Nazi” fairy tales — or even the funny way they dress — they will publicly gloat when you are carted off to prison in handcuffs.

And there is really nothing less funny than watching reruns of old sit-coms — you wonder how you could have ever found them funny in the first place — because you didn’t really.

Jewish television producers were the ones who exploited the canned “laugh tracks” which they would dub in to their shows — to prompt the audience into thinking what they were watching was funny when it wasn’t — at all.

Here is the famous “Soup Nazi” episode in question with the laugh track removed — clearly, there is nothing funny about this scenario at all — but since it’s a bunch of Jews making fun of the “Soup Nazi”, we are allowed — and expected — to laugh at it.

And here it is with the “laugh track”: