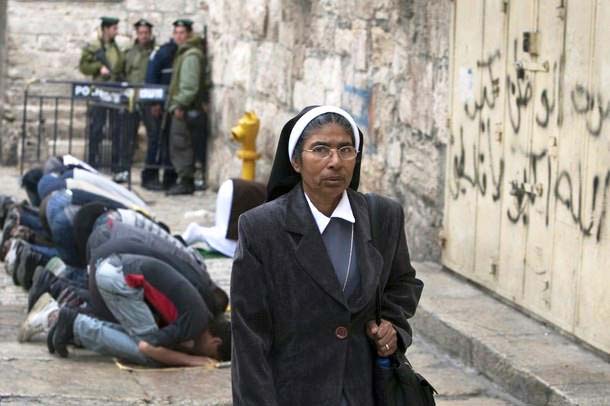 Catholic Arabs living in Israel are demanding that the Israeli government recognize them as citizens with equal rights to the Jews who dominate every aspect of life in the country:

Senior Catholic clerics in Jerusalem called Sunday for Israel to repeal a controversial law giving Jews a “unique” right to self-determination in the country.

“We must draw the attention of the authorities to a simple fact,” bishops and archbishops of the Roman Catholic, Syrian Catholic, Armenian Catholic and Greek Melkite churches said in a joint statement.

“Our faithful, the Christians, our fellow citizens, Muslim, Druze and Baha’i, all of us who are Arabs, are no less citizens of this country than our Jewish brothers and sisters,” they said.

The nation-state act was passed by the Knesset in July and forms part of Israel’s Basic Laws — a de facto constitution.

It speaks of Israel as the historic homeland of the Jews and demotes Arabic from its former status as an official language.

Because it omits any reference to equality or the country’s democratic nature, Israeli Arabs say it will legalize discrimination.

The Netanyahu government says the new law merely enshrines the country’s existing character, and that Israel’s democratic nature and provisions for equality are already anchored in existing quasi-constitutional legislation.

There were widespread Arab protests after it passed into law and some Jewish politicians said it should be amended.

President Reuven Rivlin said the act “in its current version is bad for the State of Israel and bad for the Jews.”

“Christians, Muslims, Druze, Baha’i and Jews demand to be treated as equal citizens,” said the letter, which was also signed by the Maronite archbishop of Cyprus and the Greek Melkite archbishop of Petra, in Jordan.

“We, as the religious leaders of the Catholic Churches, call on the authorities to rescind this Basic Law and assure one and all that the state of Israel seeks to promote and protect the welfare and the safety of all its citizens.”

The Catholics have been vainly praying for the conversion of the Jews for almost 2,000, and it has gotten them nowhere.  Jewish identity is not based on their religion but rather on a common racial identity.  A Jew cannot renounce his racial identity anymore than a leopard can renounce its spots.  When the Catholics gave the Jews an ultimatum to convert or leave Spain in the 15 century, the vast majority of them chose to leave, and the ones that stayed only pretended to have “converted” while still maintaining their jewish identity in private.

It was around this time that the Catholic Church formally announced that race was not a consideration for being a Christian in order to encourage jewish conversions.  It would seem that for over the 1,000 previous years there was tacit understanding that Christianity was the exclusive religion of the White Europeans, but when Spain began its colonial expansion, the Church declared that Christianity would now be open to everyone, regardless of race, including Jews who seemed to know far better than the Catholics that they were a race, not merely a religious group.

If the Catholics can’t even get the Jews in Israel to stop spitting on them in the streets, how do they expect them to grant them “equal rights”?