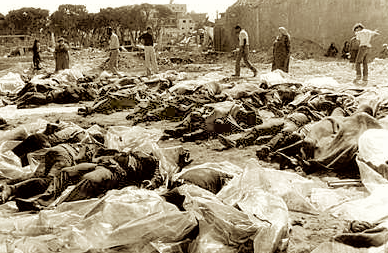 (IMEMC News)  Israel’s ministry for military affairs has formed a secret unit tasked with concealing sensitive historical documents, with a special focus on censoring chilling revelations related to the expulsion of Palestine’s original inhabitants, according to a report:

Malmab, also known as the military affairs ministry’s department for “defense establishment security”, has been conducting the operation for two decades, placing historic documents in concealed vaults, Israel’s Haaretz newspaper reported, according to the PNN.

The now-concealed documents, which contain previously accessible files sometimes even cited by researchers, cover various aspects of Israel’s murky history, including its nuclear weapons program, foreign relations and the expulsion and genocide of the Palestinian people.

Yehiel Horev, who launched and headed the project until 2007, believes concealing the documents, specifically the ones related to the expulsion of 700,000 Palestinians in 1948, remembered as “Nakba Day”, is essential in avoiding further upheaval among the region’s Palestinian residents.

Asked by Haaretz about the motive behind hiding previously published documents, Horev explained that the measure was taken to delegitimize studies done about the expulsion of Palestinians, denying researchers credible references to back up their claims.

“The question is whether it can do harm or not. It’s a very sensitive matter. Not everything has been published about the refugee issue, and there are all kinds of narratives. Some say there was no flight at all, only expulsion. Others say there was flight. It’s not black-and-white,” he said.

Israel has asserted that the mass exodus of Palestinians, which paved the way for the formation of the regime in 1948, happened as a result of Arab politicians who had encouraged the population to leave the territory.

Concealed documents revealed by the report, however, present a different narrative, admitting that as much as 70 percent of displaced Palestinians were driven out of their lands as a direct result of “Jewish military operations.”

One such document from 1948 even describes the specific causes of the exodus from specific Arab localities, making references to the notorious Jewish Irgun and Lehi (also known as the Stern Gang) killing squads.

Ein Zeitun – “our destruction of the village”; Qeitiya – “harassment, threat of action”; Almaniya – “our action, many killed”; Tira – “friendly Jewish advice”; Al’Amarir – “after robbery and murder carried out by the breakaways”; Sumsum – “our ultimatum”; Bir Salim – “attack on the orphanage”; and Zarnuga – “conquest and expulsion.”

The Irgun and Lehi militias were most notorious for their role in the April 1948 Deir Yassin massacre, killing hundreds of villagers in a village populated by no less than 600 residents.

According to the report, among other chilling revelations describing systematic killings, looting and abuse that were later concealed by Israeli authorities, was a document describing the 1948 destruction of the Palestinian Safsaf village in 1948 where an Israeli settlement was later built upon.

“Safsaf [former Palestinian village near Safed] – 52 men were caught, tied them to one another, dug a pit and shot them. 10 were still twitching. Women came, begged for mercy. Found bodies of 6 elderly men. There were 61 bodies. 3 cases of rape, one east of from Safed, girl of 14, 4 men shot and killed. From one they cut off his fingers with a knife to take the ring,” read the document.

What the Jews did to the Palestinians in 1948 and Christian Russia in 1917 is what awaits the rest of us if they achieve the world domination that they seek.

Both Israel and the USSR were founded and perpetuated on genocide and iron-fisted tyranny and censorship.

Rewriting history is a specialty of Jews — and it involves either completely fabricating self-serving events such as the Holocaust or erasing their own attempts at ethnic cleansing, such as the Holodomor in the Ukraine or the genocide in Armenia.

Jewish disinformation agents are working hand-in-hand with Wikipedia to become the only “reliable” source of history online — and it claims to allow “anyone” to edit articles, but that’s true as long as those edits conform to the controlled narrative that the Jewish watchdogs want you to know about.

Jewish-owned Google is burying any search results that contradict the official narrative which attempts to cast Jews and Israel in the most positive and flattering light.

Google’s censorship algorithms make Orwell’s ‘memory hole” look like child’s play because it no longer requires deleting a paper trail as everything is becoming digital.

But when information about Zionist heroes, terrorists and supremacists get censored by their own algorithms — all of a sudden they cry foul.

And it’s utterly foolish and naive to think that they would do otherwise — this is the essence of Realpolitik.