Serial Killers And Their Addiction To Jewish-Produced Pornography 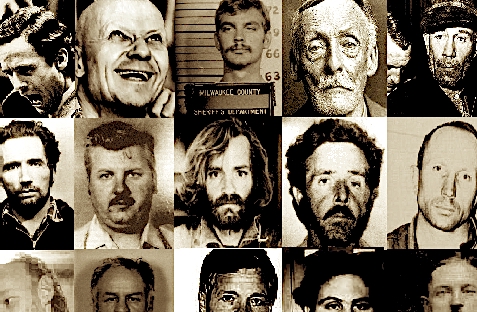 (Net Nanny) While jewish-dominated Hollywood has produced dozens of highly-profitable movies that sensationalize serial killers, none of them have delved into the unsettling connection many of these psychopathic killers have to their addiction to pornography, another “entertainment” industry dominated by jewish interests:

Viewing pornography doesn’t necessarily cause violent behavior; however, I believe that if someone has aggressive or violent tendencies, viewing violent pornography may exacerbate those tendencies by giving the viewer the idea that fantasies might be “normal.”

The following is a summary of direct quotes or information about various convicted serial killers from the past:

-Serial killer Jeffrey Dahmer of Wisconsin, speaking of his routine before hunting for a victim said, “Just…using pictures of past victims…the pornography videos, the magazines…” Jeffrey Dahmer killed 17 boys and men.

–Ted Bundy, convicted rapist and mutilation murderer of Washington, said that hard-core pornography had a “crystallizing effect” on his violent tendencies and his acting out during the 1970s.

–Arthur Gary Bishop from Utah, executed for raping and murdering five boys in the 1980s, said pornography’s “effect on me was devastating.”

–Andrei Chikatilo, a Russian serial killer, murdered at least 53 women and children. “…with pictures of naked women in his prison cell, he blamed pornography as the cause of this troubles.”

–John Wayne Gacy‘s wife filed for divorce in 1976 because “Gacy’s moods had become erratic, and [she] had found Gacy’s pornographic magazine collection which was all centered around young boys.” Gacy killed at least 33 young men and boys in Chicago, Illinois.

-The nickname BTK (bind, torture, kill) was given to Dennis Rader, a Kansas native, who killed 10 people. “He kept meticulous records of his fantasies and crimes in what he called his ‘mother lode’ collection of pornography.”

–David Berkowitz killed over a dozen people in New York. He joined a cult and was introduced to “drug use, sadistic pornography and violent crime.” The cult also created and distributed child pornography.

–Richard Ramirez was exposed to explicit pictures of his cousin “raping Vietnamese women and severing the heads of Vietcong soldiers.” He in turn killed at least 13 people in California.

–Ottis Toole from Florida became obsessed with gay pornography. He “committed his first murder at the age of 14.” During his killing spree, accompanied by Henry Lee Lucas, he killed 108 people.

-The Grim Sleeper, Lonnie Franklin Jr., “had a penchant for prostitutes and pornography.” A resident of LA, he would pick up prostitutes, take pornographic pictures of his victims, then strangle them to death. His killing spree included 11 murders.

-In the 2013 murder case of Tia Sharp, a 12-year-old girl from the UK, the judge declared to murderer Stuart Hazell, “the records of your internet searching on your mobile phone make abundantly clear that you were looking out for pornographic pictures of pre-teen girls.”

-In 2013, on the day Mark Bridger, a UK native, abducted April Jones, he “viewed online photographs of a young girl and a pornographic cartoon depicting…rape.”

The use of pornography likely will not result in the casual viewer to commit violent acts; in the cases cited above, their behaviors included pornography use. I believe pornography can have serious and lasting affects on behavior.

This list, of course, is just the tip of the proverbial iceberg; if we were able to access case files and psychological profiles of all arrested serial killers, mass murderers, serial rapists, and just your everyday killers and sex-related criminals, we would, no doubt, see a disturbing connection between these psychopaths and their relationship to jewish-produced pornography.

Mere common sense — which isn’t so common these days — would suggest that pornography has absolutely no redeeming social value whatsoever, and those that produce it know that —  which is why they spend millions of dollars to produce it and then turn around and give it away for free on the internet.

The “right” to produce, distribute, and profit off the sale of obscene and destructive pornography is not protected under the U.S. Constitution’s First Amendment of “free speech” — but somehow jewish “legal experts” have convinced the courts and the public that this is, in fact, the case.

They will claim that “obscenity” is a “subjective” and therefore meaningless term that means different things to different people.

And while we all argue over that definition, the Ted Bundys of the world are killing men, women and children daily — and tens of thousands of women are raped each year.

We cannot rely on our government to act responsibly on this issue, so we need to make every effort possible to protect our children from this menace, which they are being exposed to at younger and younger ages.