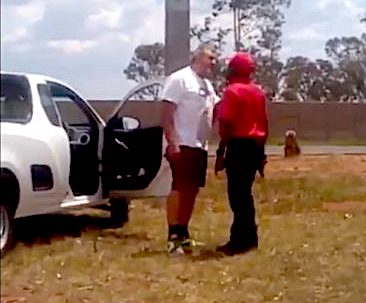 The cowardly murder of Daniel Christoffel van Heerden, a 61-year-old White man in South Africa, was captured on video as he argued with a Black parking lot guard. From the video’s commentary:

“All that will stop me is a bullet.” That was the last words that 61-year-old Daniel Christoffel van Heerden, spoken on Tuesday afternoon, had before his last breath in his 17-year-old son, DonJaun’s arms blowing has.

He was a well-known resident of Meyerton and the owner of an established security firm. According to his daughter Marie, her father was shot dead in the corner of Johan le Roux road and boundary street near Bokkie Delport scrap yard at about 14:00, after he and his son confronted a Red Ant security guard.

According to the security guard’s statement, he enjoyed lunch when van Heerden stopped them behind his bakkie and confronted him. He claims that van Heerden removed his bakkie’s keys from the vehicle, after which an argument arose.

The guard who is currently in custody at the De Deur police station claims he was under the impression that he was being hijacked. He pulled his CZ 7.75mm firearm and shot van Heerden once in the back. He then fled, but was arrested shortly afterwards by police.

Shocking as it is to see this on video, it is happening virtually every day in South Africa, Australia, America, Europe, and Canada, all the former White lands.  Whites are being brutally and “senselessly” murdered by violent Blacks and other non-Whites.  If the roles of the victims and murderers were reversed, we’d never hear the end of it from the transparently biased jewish-controlled media that is doing everything in its power to make sure that Whites don’t wake up from their slumber and realize that there’s an undeclared open hunting season on them.

In fact, there is a virtual media blackout on the gruesome farm murders that have been happening in South Africa for the last twenty years since the “fall” of Apartheid.  Whites everywhere need to study and fully understand why the Whites are slowly being exterminated in South Africa — because it is coming to your town soon, not just in South Africa.  As minority non-White populations grow in our White lands, so do these “random” murders.  Yet so many Whites dare not speak about it for fear of being smeared as a “racist”.  Are you going to allow a meaningless epithet have deadly control over your thoughts and actions?

As William Gayley Simpson asked in his book: Which Way Western Man?