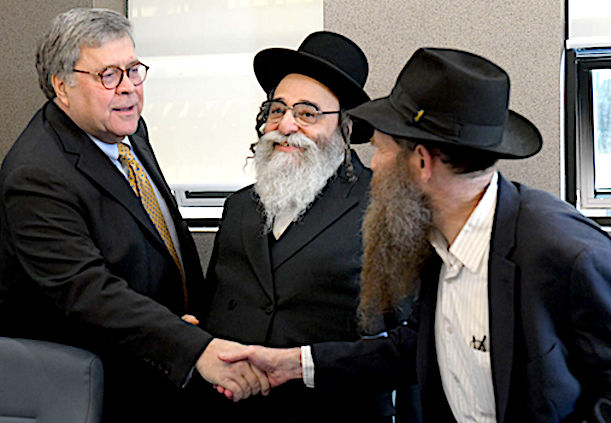 (Jewish Telegraphic Agency) Tiffany Harris, the Black woman who made headlines for randomly slapping three Jewish women in December on the streets of Brooklyn for no apparent reason whatsoever — and then quickly being released from jail — has been charged with federal hate crimes:

U.S. Attorney General William Barr announced the Justice Department’s decision to charge Tiffany Harris in a meeting Tuesday morning with Jewish leaders in Brooklyn at which he pledged “zero tolerance” for anti-Semitism.

“These are the kinds of cases that maybe in the past would have been treated locally, but I think it’s important for the federal government to plant its flag,” Barr said at the meeting. “We will move aggressively when we see this kind of activity.”

Harris has emerged as a flashpoint in the debate over a bail reform law that went into effect Jan. 1 in New York state. The law, which prohibits bail requirements for most nonviolent and minor offenses, was intended to ensure that defendants are not treated differently based on their financial means.

Harris’ arrests — after her release, she was arrested again for assault — took place before the law went into effect. Still, politicians who oppose the law have cited the 30-year-old woman in making the case that judges should have discretion to impose bail requirements.

“A bigger, stronger example should have been made of this violent anti-Semitic criminal, not the opposite,” Lee Zeldin, a Republican Jewish congressman from Long Island, said earlier this month.

That appears to be happening with the federal charges, which come amid Barr’s “zero tolerance” pledge and as the New York Police Department seeks ways to circumvent the bail law.

“I am appalled that Tiffany Harris is being used as a scapegoat for the fear-mongering surrounding bail reform,” Lisa Schreibersdorf, Harris’ lawyer, told the New York Daily News on Tuesday.

The U.S. Attorney General, William Barr, is Jewish through his father and should have recused himself in this case for the conflict of interest, but it’s an antisemitic ‘canard’ to claim that Jews cannot be objective about a legal matter involving their fellow Jews.

Bear in mind that none of Harris’ Jewish ‘victims’ were seriously injured by these ‘attacks’, except perhaps their ‘dignity’.

White people are permanently maimed and murdered by Blacks in random attacks almost every day in America, but those attacks will never be prosecuted as Federal crimes.

The reason Harris was let out on bail after slapping the Jew was that the court did not consider her crime ‘serious’ and there were obviously no injuries to her ‘victims’.  But now that she got out on bail and did it again, Jews want that bail loophole closed.

When a White person is murdered by that loophole, no one cares.

When a Jew gets slapped, an example needs to be set.

The idea that merely slapping a ‘protected class’ in America has now reached the level of a Federal crime should really make people wake up to what’s coming. This is just the beginning.

This two-tier justice system will increase antisemitism, not reduce it, and it should be Jews themselves who object to this dangerous special treatment.