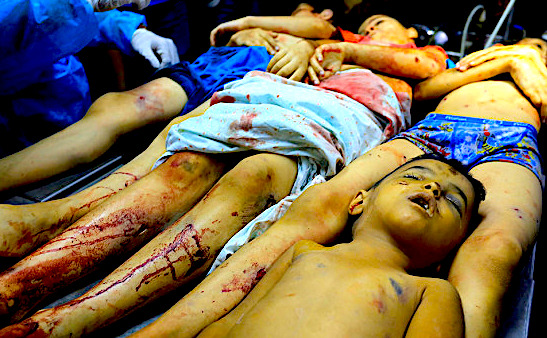 While leaving a night club in Warsaw, Poland some Israeli tourists were severely beaten by a group of Arab men who apparently attacked him in retaliation for the ongoing genocide of Palestinians in Gaza:

Yotam Kashpizky was left with facial and ocular fractures by the assault, which his brother Barak described in a Facebook post together with photographs of his brother’s injuries.

Barak stated that Yotam was assaulted in the early hours of Sunday morning by “a group of Arabs” who attacked him without provocation.

“The Arabs began beating him and his friends only because they were Jewish,” Barak said. The group of Israelis were returning to their hotel from a nightclub, he added.

“A group of Arabic-speakers approached them and asked if they were from Israel,” Barak recounted. “When they replied in the affirmative, they were mercilessly attacked, accompanied by shouts of ‘f**k Israel.’” He later told an Israeli news station that they also chanted “free Gaza” during the attack.

Yotam, he added, was in a taxi at the time, and ran toward his friends in an effort to stop the attack.

“An Arab man, who was apparently wearing brass knuckles, punched him and Yotam lost consciousness,” said Barak. “Afterwards, another friend came out of another taxi in order to help.”

At that point, some girls in the Israeli group began to scream and the attackers fled.

Barak spoke bitterly of the bystanders at the scene, saying none of the Poles did anything to help.

“Even the security guards at the club who were called to help didn’t lift a finger,” he said.

“Yes, 2019, Warsaw, Poland, and the reality is returning,” Barak asserted. “Poles stand by and watch, while people ‘not of their people’ beat Jews to the point that they lose consciousness. Today it’s my brother, tomorrow it will be one of your relatives.”

For no reason and out of the blue, once again Jews are attacked just because they are jewish.  No other people in the world seem to have this unique problem of being hated and attacked merely for being who they are.

Again, Jews will always tell you what happened to them, but never tell you why.  Given the well-deserved reputation that Israeli tourists have in Poland for arrogantly acting as if they own the place, it should surprise no one that they get into drunken fights.

Think about it: if you were an Israeli coming out of a night club in Poland, and some Arab guy comes up to you and asks if you’re an Israeli, are you going to admit to that, knowing full well it is being asked as a provocation?  So that part of the story is a stretch, right off the bat.

A Jew recently literally spat upon the Polish Ambassador on a recent trip to Israel because the Poles refused to cough up billions of dollars in “Holocaust” reparations, so it’s rather foolish for these Jews to expect any Poles to jump into this melee to protect them.

But of course it would be “antisemitic” to suggest that it is within the power of the Jews themselves to change their behavior and greatly reduce, if not eliminate, the amount of “antisemitism” that’s directed toward them.