Slovakian MP: Islam Is the “Pedophile Creation of the Devil,” Mosques Banned 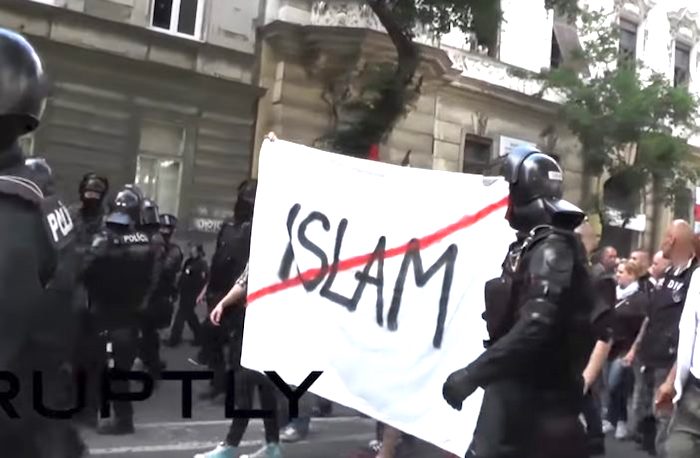 Slovakia is the last EU Member State without a single mosque, TRT World reports. Previous attempts to build have been halted by politicians:

The country does not recognise Islam as a religion and only have a few thousand Muslim residents. Islam must not be taught in schools and the 5,000 Muslims, mostly European ones, who reside in the country are not officially recognised. They account for only 0.1% of the population.

In 2007, politicians changed the country’s laws so that 20,000 signatures from members were required to be recognised by the state. In 2017 they more than doubled the number of necessary signatures.

Not being officially recognised poses major difficulties for the group. Among other things, they are not allowed to have official religious leaders, conduct Muslim marriages or receive financial contributions from the State, rights which 18 other recognised religions have.

According to some of the country’s politicians, Islam is a serious threat.

“Islamisation begins with kebab and in Bratislava it has already begun. So understand what it could be like in 5-10 years,” says MP Andrej Danko.

“Every normal European, Christian or atheist fears this satanic pedophile creation of the devil,” rumbles another critical MP.

According to TRT, the situation was further complicated for the country’s Muslims in connection with the 2015 asylum wave. Slovakia then used the absence of mosques as an argument not to accept any migrants.

The TV channel also claims that Slovakia violates EU rights laws by not permitting the building of mosques.

It’s amazing how simple the solutions to basic problems are if only you have the will to make them happen.  This anti-Islam campaign in Slovakia will be criticized by the West as “undemocratic” and a “threat to basic human rights,” but Slovakia is obviously interested only in the human rights of mostly White and Christian Slovakians.  They clearly understand that there is no way that a free White people can peacefully coexist with brown Muslims and Blacks — which is a witch’s brew for social unrest and destruction.

And it’s true that if you allow just one kebab stand, within a generation you’ll be watching your daughter give birth to Arab children.  Slovakia has done well without kebabs for over a thousand years, but it won’t survive another 20 years if it allows Islam to establish roots.  Even by becoming members of the EU, Slovakian ethnic identity is now at risk of disappearing from the face of the Earth, and they would do well to follow Hungary and Poland and plant the Cross along the border to keep the EU vampires out.