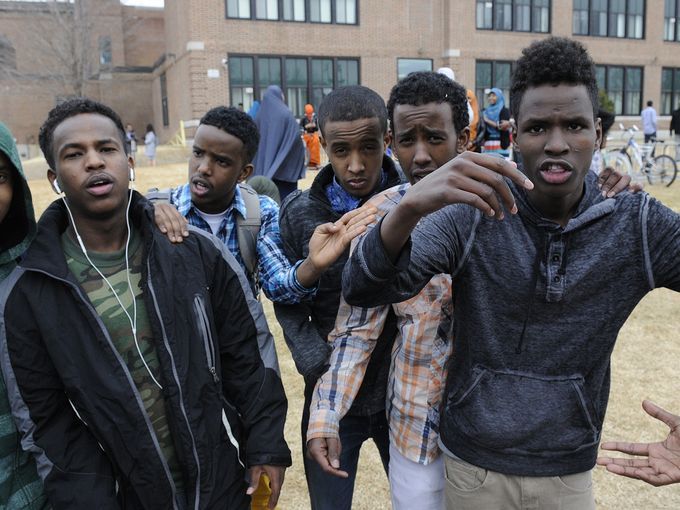 Eyewitnesses claim that over 100 Somali teens and men stormed the front gates at the Law Enforcement Appreciation Day at the ValleyFair amusement park in Shakopee, Minnesota, causing mayhem and violent attacks:

According to eyewitnesses who were at the park to celebrate Law Enforcement Appreciation Day, a group of nearly 100 Somali men mob rushed past security and amusement park staffers at the front entrance, and proceeded to run through the park and instigate fights among themselves and with guests.

As several violent fights broke out, guests began to panic as reports of people being stabbed and shot began to circulate.

Cliff Hallberg, who was inside the park with his children at the time the fights broke out said it was very frightening for his children. “I saw about 60 Somali teenagers push their way through lines and scream at guests.”

The violent fights erupted during Law enforcement appreciation day when the park was full of police officers and other members of law enforcement who received discounted tickets so that their families could enjoy the amusement park. An estimated 263 police officers responded to the fights inside the park, according to witnesses.

“This looked like a targeted attack on law enforcement,” Hallberg added.

Hallberg also told Big League Politics that his car was spit on and that the rioters were setting off car alarms and causing chaos in the parking lot, all of which can be seen in video that was exclusively obtained by this reporter.

According to eyewitnesses and police officers who wish to remain anonymous, they believe the media is covering up the fact that the violent rioters were Somali men because the media and police don’t want to offend the Muslim Somali population or influence the upcoming election.

Officers in Minnesota have told this reporter that they are often told to avoid using the word Somali when discussing crimes committed by members of the Somali population because police and local Democrats have asked them to “stand down” in an effort to create positive community relations between Minnesota natives and the continually increasing Muslim Somali “refugee” population.

In the United States, Minnesota is the state with the largest Somali population.

Minnesota, which has large Swedish and Norwegian populations, is treating their pet African refugees the way their cousins in Europe are at this time — heads in the sand, pretending everything is normal.  Just don’t upset them — placate them with generous social programs and hope they don’t rape, rob, and kill us.

By ignoring this mob violence, the jewish-controlled media is not doing these refugees any favors because eventually they will run up against a “well armed populace” that has run out of patience.  That they rioted at an amusement park full of law enforcement employees shows just how brazen and stupid these Somalis are.

Watch a few videos on Somali pirates, and you’ll get a good idea just how irrational and violent many Somali “youth” really are.