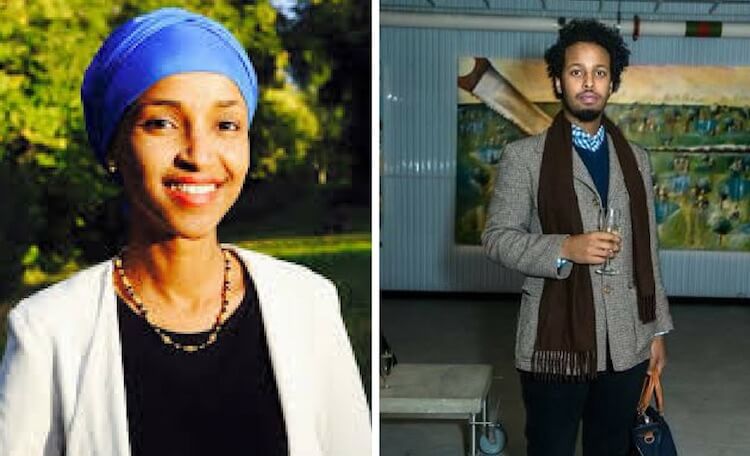 In the wake of recent accusations made against Omar concerning campaign finance fraud, this story from 2016, accusing her of immigration fraud, seems more relevant than ever:

Further investigation into social media accounts, news reports, and legal documents support the allegation MN State House of Representatives Candidate Ilhan Omar married her brother, who is not a US citizen, in 2009.

As Alpha News reported last week, Powerline Blog raised some interesting questions about the current state of the DFL candidate’s marriages and the possibility of her committing immigration fraud.

Research by Alpha News suggests that Omar was involved with Ahmed Nur Said Elmi (her legal husband) and Ahmed Hirsi (her cultural husband and father of her children) at the same time.

Omar, whose Instagram handle is @hameey, has recently made her Instagram public again. However, she has deleted any pictures of her and Elmi from her visit to the United Kingdom in 2015. Screenshots of Elmi and Omar were featured on Powerline Blog and Alpha News.

…The Wall Street Journal reported in 2008 that the refugee program in Africa was halted by the United States because thousands of Africans lied about their family ties in order to enter the United States.

The Omar camp provided a letter from U.S. Attorney Andrew Luger denouncing a Fox 9 investigation that claims that his office has asked Immigration services to look into her marriages.

Clearly, Omar has great difficulty telling the truth — and if she were a White male, her hopes of winning a seat in Congress would be over at this point, but because she’s a Black female Muslim, she will be protected by the king makers in the media – the same media that protected Obama throughout this campaign and presidency.

Make no mistake, despite — and because of — these serious allegations of campaign and immigration fraud, Omar will be a shoe-in to the U.S. House of Representatives.

They prefer that candidates for high office show signs of corruption — greed and graft — because these people can be bribed and blackmailed into do their bidding.

Watch for news stories over time where Omar proclaims her begrudging support for Israel — that will be tip off that she’s certified kosher – and these accusations against her will go down the memory hole.