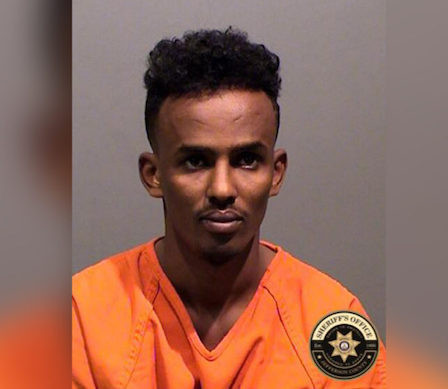 Ahmed Muse, a Somali immigrant, was arrested on Sunday and after being accused of kidnapping and sexually assaulting a 15-year-old female passenger in Golden, Colorado:

According to deputies, just after 10 p.m. on Saturday, Uber driver Ahmed Muse picked up the teen at her job in the 100 block of North Rubey Drive in Golden using UberPOOL to go to her home 10 miles away.

Brianna Allen lives just 15 minutes away from work at the Cast Iron Tavern, but says the whole trip took an hour and a half. Allen and her mother, Shamara Ludwig, spoke exclusively with FOX31’s Alex Rose about the frightening ride.

“We’re on the way to my house at first, and then the Uber driver had turned around,” said Allen. “When I looked on the phone, I noticed that it actually wasn’t on the Uber app, it was on Google Maps,” she added.

Authorities said that the girl had to sit in the front seat because there was another POOL passenger in the backseat. Despite the girl’s home being first along the route, Muse bypassed her home saying that the app wasn’t functioning and that he had to drop off other passengers first, according to deputies.

Knowing that she was a few blocks from home, she offered the driver $10 so she could walk home so she didn’t have to travel to Interstate 76 and Pecos, the destination for another passenger just to return to Golden, according to law enforcement.

When the driver finally drove Allen back home, the teenager said the driver forced himself on her.

Muse was identified through the Uber app and arrested on Sunday. He faces charges of second-degree kidnapping, false imprisonment, and harassment.

Other passengers in the vehicle corroborated the teen’s version of events.

“I wish I had never got in the car. I don’t trust Uber or Lyft. I don’t want to get in one ever again, because that’s a complete stranger,” Allen pointed out. “I feel uncomfortable, and I always feel like I have to be cautious of my surroundings and in my own neighborhood. I know that they get you from here to there, but it’s just not safe,” she said.

Clearly, this is all just a “cultural misunderstanding,” and if it weren’t for these “vibrant” Somalis, America would be a boring backwater country with no “flavor”.  Rape and sexual assault are all part of life in Africa, and it’s unfair to expect these migrants to immediately conform to our “rigid” and “fascist” ways of life.  Just because we don’t tolerate sexual assault doesn’t mean that it’s “wrong” for other people from other “cultures” to engage in it.  While feminists might object to it, we should seriously consider passing new laws that exempt Africans from laws against rape in our country.

Not to blame the victim, but clearly this teenager’s parents have failed her.  They obviously never had that little talk with her where she was warned, “Never get in a car with a Black man, ever.”  She has obviously been raised to believe that it’s the “right thing to do” to trust everyone, regardless of skin color and country of origin.  Her parents never told her it’s better to be a living racist than a dead liberal.  Instead, the victims here blame Uber, but what is Uber going to do?  Not hire Blacks?