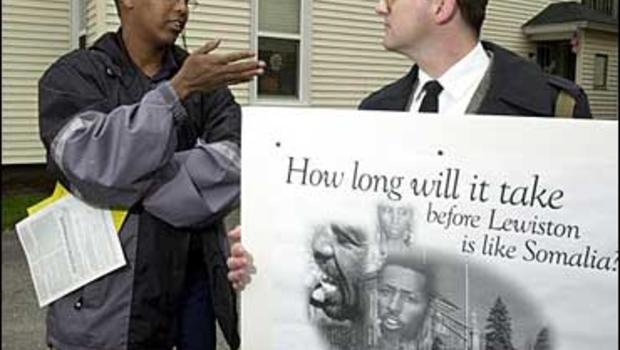 “The 38-year-old man who was badly beaten during a brawl this week in Lewiston’s Kennedy Park has died, state police said.

Donald Giusti of Lewiston died Friday afternoon at Central Maine Medical Center, where he had been hospitalized since late Tuesday night when the fight erupted.

Two groups clashed Tuesday on Knox Street after teenagers in a car reportedly drove past the park and shot pellets and BBs at a group gathered there, according to Sun Journal sources who said they witnessed the events.”

Comment:
The Somalis indiscriminately shoot a pellet gun into a crowded park, and when the White man tries to defend himself and protect others from getting shot at, he’s portrayed as having done something wrong.

Donald Giusti is now dead and leaves behind two children.

In another recent incident, a video of Somali teens attacking Whites in the streets of Maine went viral on Twitter:

MEDIA BLACKOUT!! THIS IS MAINE!

Local mom recorded a mob of somali teens & kids with bats & other weapons attacking two non-somilians. The attackers yelled at the woman to, “Stop me, b*tch” pic.twitter.com/gpYB5RP2my

The U.S. immigration official who had the bright idea to settle these third-world Somalians in rural White Maine is the one who is ultimately responsible for Donald Giusti’s death.

But when has a government official ever been held responsible for any deaths resulting from their decisions? We see the same trends in Europe, where Merkel and others continue their open borders policy, as Europeans are being robbed, raped, and murdered in the streets.

Why are there even Somalis living in Maine?

Just a few weeks ago, we also learned that Somalis who had been “settled” into Minnesota are now accused of massive welfare fraud costing Minnesota taxpayers $100 million a year.

Meanwhile, it appears there is a media blackout of this recent incident in Maine because it does not fit the agenda.

Please consider sharing this story with friends and family – the controlled media is completely ignoring it.