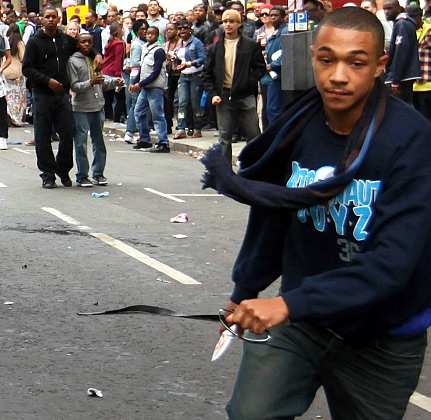 Because of all the immigrant-based violent crime in London, Somalis are choosing to send their UK-born children to grow up in war-torn Somalia with relatives rather than deal with knife crime in England:

British teenagers are being sent by their parents to Somalia, itself recovering from a series of terror attacks, because of concern that the police cannot protect them from knife crime.

Representatives from north London’s Somali community say hundreds of children have been flown to Somalia, Somaliland and Kenya because of rising concerns over drug gangs and county lines, the criminal networks that use children to transport drugs from cities to the provinces.

In a series of interviews, Somali mothers who arrived in London after fleeing their country during its 1990s civil war told the Observer that many of their sons had asked to leave the UK because of drug gangs and the threat of violence.

Rakhia Ismail, Islington deputy mayor, said: “Sending them away has become the only way they can be safer. This issue of safety has been repeatedly raised by the community but nobody has listened. So many children have gone abroad. Two weeks ago, there was a stabbing and a child was taken back home two days later.”

The revelations follow a week of heated debate over the causes of and potential solutions to Britain’s knife crime epidemic. Seventeen people have died after attacks in London alone since the start of 2019. On Saturday, there were reports that three people were in hospital after an attack at a nightclub in Birmingham, a city reeling from three knife fatalities within days last month. And a 15-year-old boy was charged with murder after the stabbing of 17-year-old Ayub Hassan, in west London, on Thursday afternoon.

The high levels of violence facing parts of British society are evident in the testimony of Islington’s sizeable Somali community. Representatives say 50-70% have been directly affected by county lines and knife crime.

Sadia Ali, treasurer of Islington Somalia Forum and founder of Minority Matters, said: “Hundreds of youngsters have been taken to Somalia, Somaliland and Kenya, some taken all the way to the rural areas. Parents feel they have no choice if they want their son to be safe.”

So apparently even Somalis can get fed up with diversity.  Somalis moved to England because it was White, safe, and offered tons of free welfare benefits.  No one told them that when England became more and more non-White that there would be any problems, such as rampant violence, but that was very naive on the part of the Somali migrants, who left their own country because of the violence and poverty created by themselves and their own race.

Wherever you go, you take yourself and all your problems with you.  It’s really not fair to the police in England to expect them to keep the peace when their country is spiraling downward into becoming just another Third World country itself.  Have any government experts done a study to find out just how many non-Whites can be in England before it is no longer “British”, or at what point the country can officially declare itself Third World and therefore free of racism?