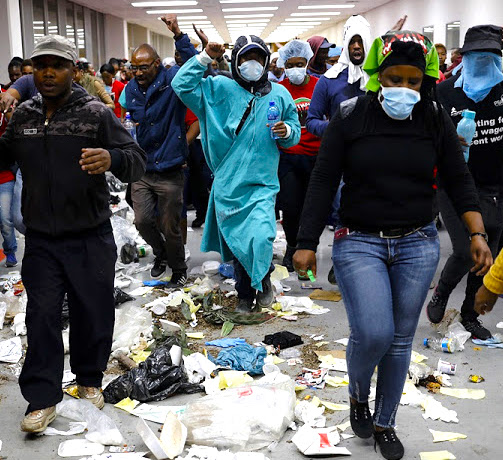 The DA said on Thursday that it was “horrified” by a report that amputated limbs and dead babies were found regularly at the laundry of Charlotte Maxeke Johannesburg Academic Hospital:

On Wednesday, IOL reported that a woman who works in the laundry section of the hospital said she frequently dealt with an array of horror finds among the linen – from amputated limbs to babies; dead and alive.

According to the report, the laundry is gathered from various wards and sent down a metal chute where it lands on the floor to be sorted. The sheets are often blood-soaked, covered in faeces and contain placentas and blood clots. The dead babies are found at the bottom of the chute, often wrapped in soiled linen.

“Workers at the laundry have complained for a long time about the stress of finding foetuses and body parts in the linen, which is taken from wards and sent down a chute to the laundry,” DA health spokesperson Jack Bloom said in a statement.

Bloom said he wrote to the hospital CEO, Gladys Bogoshi, and included two horrific photos that workers had taken – one of a fully formed baby, and the other of a foetus covered in blood – but did not receive a reply.

“The hospital management has inexcusably failed to act by tightening controls to ensure that medical waste is safely disposed of.

“Laundry workers work in terrible conditions and risk infection from medical waste that they are not meant to deal with.

“I hope that urgent measures are taken to resolve this problem, which highlights generally poor management in hospitals that the Gauteng health department has failed to address over many years,” Bloom said.

According to IOL, Bogoshi did not deny the claims.

“Sometimes they are found disposed as part of the waste by unknown people and end up at the laundry as the waste gets down the chutes. All reported cases are investigated and improvement plans are implemented to prevent a recurrence,” she reportedly said.

It’s really not fair to judge the hygiene in hospitals that are run largely by Blacks; after all, before the White man showed up in Africa there were no hospitals, or schools, or basically anything that we would construe as signs of civilization.  Before Whites developed South Africa, no doubt Black Africans just tossed dead babies into holes in the ground if they didn’t want to eat them or use the body parts for some witch doctor ritual.

Once the civilizing influence of the Whites is eradicated by the Blacks who believe that all of South Africa is rightfully theirs, dead babies and severed limbs will become common sights in the streets because there won’t be any hospitals left to run into the ground.  And if Blacks have become squeamish about finding random body parts around now, just wait until Blacks get their wish and all the “evil” and “racist” Whites leave them to their own devices.