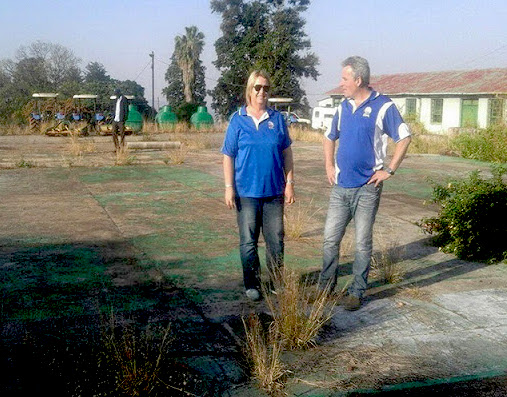 More than 2,000 workers have lost their jobs in the latest South African “land reform” project — which seizes white farms and hands them over to Africans — as one of the country’s largest tea plantations, formerly run by Lipton Teas International, has totally collapsed into weeds after less than ten years in black hands:

The collapse of the Makgoba Tea Estate (previously known as Sapekoe Tea Estate) near the northern town of Tzaneen contrasts strongly with the plantation’s heyday under white management, when it employed over 6,400 people and was one of the country’s largest suppliers of tea to both local and export markets.

The plantation was operated by international tea maker Lipton since the 1960s, but in 2006, the estate was however taken over by the ANC government in 2006 as part of the “land restitution program” and saw over 600 African families being moved on to the farm to run it.

The ANC also injected over 65 million Rand in “investment” and “loans” to the Africans who all claimed to be “farmers” and “original residents.”

A visit this past week to the estate by a local newspaper, the Bosveld Review, found however that all the fixtures had been stolen, the buildings stripped and desolate, and the formerly pristine rows of tea trees left to be overrun with wild weeds and bush.

According to the newspaper, the surviving tea bushes had been left to grow up to 10 feet high; “the agricultural infrastructure had been stripped and removed from the property and opportunities to create employment looked bleak as planned projects had come to little.”

A forensic report marked ‘for internal use only’ confirmed that the estate was stripped of assets in excess of R121 million and subsequently, in 2011 the department became the caretaker of the estate, the paper quoted local opposition politician Jacques Smalle from the “Democratic Alliance” party.

Smalle said the department appointed the Greater Tzaneen Economic Development Agency to develop a business plan and pumped R65 742 000 into the dilapidated estate between 2011 and 2015.  “It is now clear that no farming activity has taken place for years.

This is not the first such “land restitution” program to have collapsed under the ANC’s rule. As pointed out in the book “The Great South African Land Scandal,” African rule has been disastrous for agriculture in South Africa: in 2007, thirteen years after adopting black rule, South Africa became a net food importer for the first time since its founding in 1652.

The Black concept of wealth creation is to loot and pillage until there’s nothing left to steal, and then starve to death.  It is utterly futile to give Blacks anything that they cannot create for themselves without them eventually ruining it.  After all, if you can’t build it yourself, how can you maintain and repair it when needed?  You can’t, and that’s where pathologically altruistic liberals completely fail in their relentless pursuit of proving to the world that everyone is equal.  Giving aid to Blacks is actually a form of benign torture.

Because of Black incompetence, there are now 2,000 additional unemployed Blacks who used to have reliable jobs working on this tea plantation.  But Blacks would rather be jobless and starving that to work for the White man — their over-inflated pride will not allow them to come to terms with the fact that they are completely dependent on Whites for their survival.  They honestly believe that they’d be colonizing Mars right now if the White man hadn’t been such a racist.