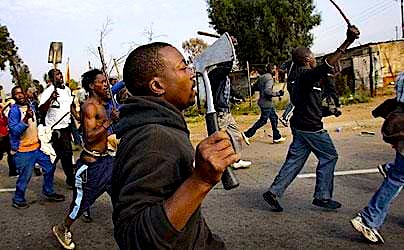 In a week that saw many protests in South Africa against the persistent killing and raping of women and children, a young Israeli tourist was gang raped on her birthday by a group of Black men in Graskop:

The incident happened on Sunday while she was at her place of accommodation. A couple who was touring with her, were also attacked by the same armed men during the ordeal, reports Lowvelder.

According to an impeccable source who cannot be identified for professional reasons, the tourists were on holiday when a gang entered their accommodation, forced them to undress, raped the one woman and robbed them of their belongings before fleeing the scene.

Graskop SAPS said they could not comment on the information since it is sensitive, but confirmed that it is under investigation. Police spokesman, Brig Leonard Hlathi did not reply to any of the media queries.

Oupa Pilane, president of Kruger Lowveld Chamber of Business & Tourism (KLCBT), said such attacks impacted everything and that he was distraught about the attack on the tourists.

“On Monday we had a meeting with the MEC of community safety, security and liaison, Gabisile Shabalala and we spoke to the SAPS’ provincial commissioner because these are organised crimes.

He once again said these crimes needed to be prioritised as the numbers of tourists visiting the area are declining by the day. “This affects us and has an impact. We are really worried and we are currently also talking to our members,” he said.

Pilane said the violence against women and children is a great concern and he feels the country needs a state of emergency.

“The president needs to implement a state of emergency, the country is in a terrible state and crime is out of control,” said Pilane.

The incident marked another of the countless violent crimes committed against women and children daily, which sparked a massive outcry this week.

No doubt the police received some seriously heated phone calls from the Israeli ambassador, and even President Ramaphosa has no doubt been put on notice.  Raping White women is generally not a problem nor is it taken seriously by the police, but mistakenly raping a Jew is absolutely not kosher.

If there is a lesson to be learned from this ugly incident it is that Jews need to be more careful when they try to pass themselves off as White, and they need to realize that Blacks more often than not cannot tell the difference.

Tens of thousands of South African Jews who staunchly supported the communist anti-Apartheid movement have fled the country in the last 20 years, with many of them flying to Israel to escape the rising violence they have fomented.

And Israelis who are interested in visiting South Africa can’t forget that before fleeing South Africa, their fellow Jews inflamed the Blacks to hate the Whites and blame them for all their problems, and that anger can often be misdirected against Jews simply because they look White to the average Black in Africa.