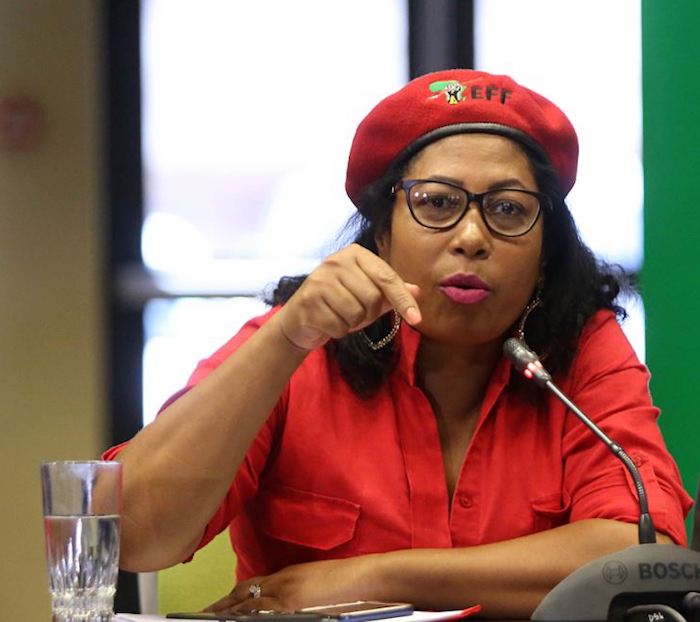 As South Africa’s National Assembly gets ready to rubber-stamp an amendment to the constitution to allow the wholesale theft of White property without compensation, Economic Freedom Fighters (EFF) politician Hlengiwe Mkhaliphi said those arguing against legalizing land grabs are ‘beneficiaries of racism’:

The National Assembly agreed to the establishment of a committee that will draft an amendment to section 25 of the Constitution – a law which will allow the government to take homes from the people – and refuse to pay them compensation.

As many in the nation see the move as retribution for the ‘original sin’ when decades ago black people were driven off their land, it is believed white farmers will be driven from their homes immediately.

Governing party The African National Congress (ANC) wants to amend the law so the government can take back land and distribute it.

However, critics say it is likely it will be handed off to their friends rather than dished out to those in need.

Last week the nations politicians fast tracked the set up of a committee which will write the legal change and present it next year.

The motion was adopted with 183 MPs voting yes, 77 voting no and no abstentions in fiery scenes as South Africans battle over land reform.

Currently section 25 of the Constitution ‘just and equitable’ payment which reflects ‘an equitable balance between the public interest and the interests of those affected’ must be offered for land – but changes would abolish the need to compensate.

‘Your time is up, white people,’ She added.

The EFF will later put forward an amendment stating all land in private hands must be appropriated.

It is highly doubtful that the “moderate” Ramaphosa will be able to control the communist Economic Freedom Fighters (EFF) once the looting starts and begins to snowball.  The EFF clearly wants ALL White property, not just some of it — they want it all, and they want it now.  Blacks don’t have the patience to wait around while they hash out the so-called legality of this government theft program —  they are chomping at the bit to get their hands on everything Whites own.

After all, from the Black perspective, everything owned by Whites was stolen from Blacks — even the things that Whites built and invented are not really theirs.  The only reason Whites have so much and the Blacks have so little is “racism”, and the only “cure” for racism is a complete looting of the country.  South Africa will have to completely collapse for Blacks to even realize that they are helpless without Whites, but by then it will be too late.