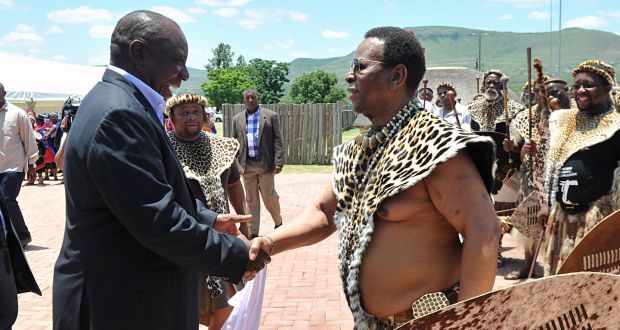 A Zulu “king” with a bone through his nose has accomplished what none of the disenfranchised Whites have been able to do–make the communist ANC back down from their plans to steal whatever land they want:

A Zulu king’s threat to undermine the chances of the African National Congress (ANC) at next year’s election has led the ruling party to exempt tribal territories from land reform in South Africa.

The government’s decision has come amid a national debate around whether the constitution should be amended to allow expropriation without compensation to remedy one of colonialism’s worst legacies: the forced displacement of indigenous people.

Millions of blacks were illegally evicted from their land – which ended up in white hands – and sent to live in tribal reservations known as “homelands” under the National Party’s racial segregation policy.

More than two decades on from the transition to democracy and this injustice has not been adequately rectified, despite attempts to tackle the issue through state-driven land redistribution and compensation programmes for the dispossessed.

White commercial farmers and urban land hoarders have long feared they will bear the brunt of expropriation without compensation if the government amends the constitution to allow it, but tensions have also arisen between traditional leaders and the state over the issue.

Traditional leaders fear the ANC-led government wants them to relinquish also their custodianship of the 10 homelands, especially those held in trusts, following remarks made in May at an ANC meeting by former South Africa president Kgalema Motlanthe.

During the meeting he suggested that chiefs’ control over the homelands and those who live there should end.

If this so-called Zulu king had any real sense, he would have demanded that no White lands be confiscated either–because if the White farm lands fall into Black hands, the Zulus will also starve, so it’s in their self-interest to stand up for the Whites too, but that, of course, will never happen.

The “democratic” political system in South Africa will not protect White interests–nor will Whites ever be allowed to vote on their own future.

So-called democracy is meant to artificially elevate the Blacks to a point where the mob rules.

And the Black wolves will never ask the White sheep what’s on the dinner menu.