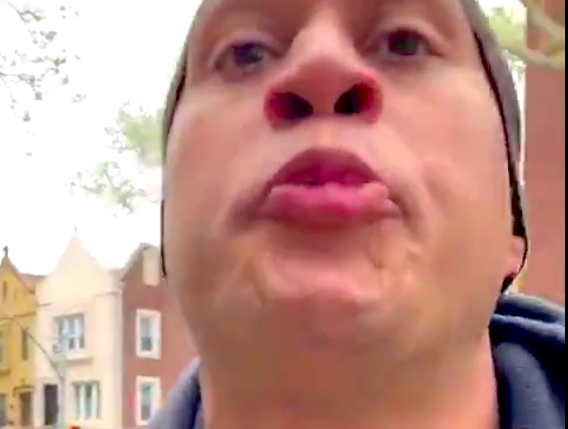 In the latest in the ongoing series of alleged incidents of harassment and assault against Jews in New York, a jewish passerby spat at and cursed another Jewish man in Brooklyn on Wednesday, an incident which was captured on video and published on social media:

On Wednesday, Jack Blachman, a resident of Brooklyn and a member of the Chabad community, intervened when he saw a passerby yelling at two Jewish girls to get out of his way on the corner of Carroll Street and Albany Avenue.

The same man subsequently turned on Blachman aggressively and shouted at him that Jews had created a cult.

“You Jewish people, yeah, I was once Jewish mother f***er,” he yelled at Blachman. “Y’all created the cult,” he added and spat in Blachman’s face.

Blachman reported the incident on his cell phone to the New York Police Department’s 71 Precinct while following the man, and the police promptly arrived to take a statement from the assailant and Blachman.

Blachman told The Jerusalem Post that the police has said to him spitting does not carry assault charges and that he could therefore only file a complaint of harassment.

To many Jews, these members of the Chabad community, such as President Trump’s son-in-law Jared Kushner, are, in fact, seen as being members of an extremist, anti-social “cult”, but apparently to point this out to a fellow Jew is now considered “antisemitic”.  Chabad Jews are working tirelessly to build their “third” temple on the Temple Mount in Jerusalem where they will begin sacrificing red cows on the altar in anticipation of the arrival of their “messiah”, so it should come as no surprise to them that other non-religious Jews might find their beliefs “extremist” and “out there”, and even make them spitting mad.

Either way, the take-away here is that these Jew-on-Jew arguments are reported to the police as “antisemitic attacks” which will be used against the so-called “gentiles” to justify passing draconian hate crime legislation to permanently shut them up as the jewish stranglehold on all public discourse tightens and all dissenting opinions are criminalized and silenced.  After all, it starts with one Jew spitting at another, and that leads to synagogue attacks and ultimately “another” Holocaust.  It may still be legal for a Jew to spit on another Jew in Brooklyn, but clearly that will have to change.