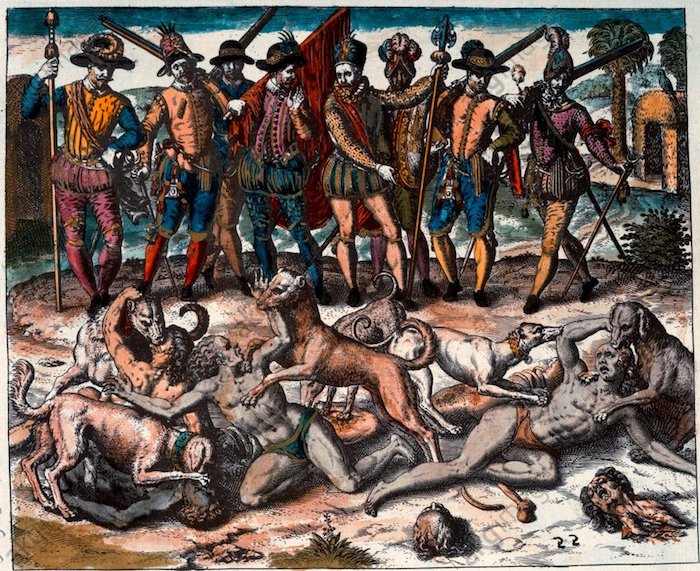 So-called “scientists” from University College London are claiming that colonization of the Americas at the end of the 15th Century killed so many people, it disturbed Earth’s climate:

The team says the disruption that followed European settlement led to a huge swathe of abandoned agricultural land being reclaimed by fast-growing trees and other vegetation.

This pulled down enough carbon dioxide (CO₂) from the atmosphere to eventually chill the planet.

It’s a cooling period often referred to in the history books as the “Little Ice Age” – a time when winters in Europe would see the Thames in London regularly freeze over.

“The Great Dying of the Indigenous Peoples of the Americas led to the abandonment of enough cleared land that the resulting terrestrial carbon uptake had a detectable impact on both atmospheric CO₂ and global surface air temperatures,” Alexander Koch and colleagues write in their paper published in Quaternary Science Reviews.

The team reviewed all the population data it could find on how many people were living in the Americas prior to first contact with Europeans in 1492.

It then assessed how the numbers changed in following decades as the continents were ravaged by introduced disease (smallpox, measles, etc), warfare, slavery and societal collapse.

It’s the UCL group’s estimate that 60 million people were living across the Americas at the end of the 15th Century (about 10% of the world’s total population), and that this was reduced to just five or six million within a hundred years.

The scientists calculated how much land previously cultivated by indigenous civilisations would have fallen into disuse, and what the impact would be if this ground was then repossessed by forest and savannah.

The area is in the order of 56 million hectares, close in size to a country like modern France.

This scale of regrowth is figured to have drawn down sufficient CO₂ that the concentration of the gas in the atmosphere eventually fell by 7-10ppm (that is 7-10 molecules of CO₂ in every one million molecules in the air).

“To put that in the modern context – we basically burn (fossil fuels) and produce about 3ppm per year. So, we’re talking a large amount of carbon that’s being sucked out of the atmosphere,” explained co-author Prof Mark Maslin.

“There is a marked cooling around that time (1500s/1600s) which is called the Little Ice Age, and what’s interesting is that we can see natural processes giving a little bit of cooling, but actually to get the full cooling – double the natural processes – you have to have this genocide-generated drop in CO₂.”

So this is how evil White people exterminated 50 million people of color just by bringing a modicum of civilization to peace-loving, environmentally-friendly indigenous people in the Americas.  The mere presence of White people anywhere in the world causes cataclysmic upheavals in the environment that has far-reaching negative effects that are felt all around the world.  White people have done nothing except exploit and genocide people of color, literally for no other reason than they are not White.

From this “study” we learn that pre-industrial White people could affect the climate in a profound way even without gas-guzzling SUVs.  Just by being born, White people, it would seem, cause global genocide without the assistance of even fossil fuels.  It seems that today’s people of color now have the “scientific” evidence here to sue the entire White race for genociding their ancestors.  If the Jews are entitled to untold billions in reparations for what allegedly happened to them in WWII, imagine the pay day that’s in store for America’s “indigenous” peoples — the greatest ghetto lottery ever held.