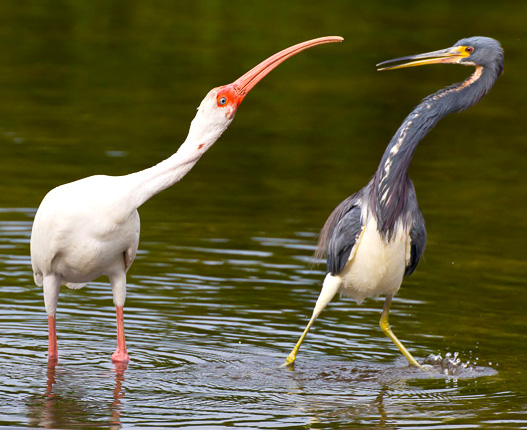 In a recent experiment in captive white ibises, many of the males exposed to the metal chose other males as mates.

These “male-male pairs did everything that a heterosexual pair would do,” said study leader Peter Frederick, a wildlife ecologist at the University of Florida in Gainesville.

“They built their nest, copulated together, stayed together on a nest for a month, even though there were no eggs—they did the whole nine yards.”

Wild white ibises—among the most common birds in Florida’s Everglades—are exposed daily to mercury through their diets of crustaceans and other small invertebrates.

The prey animals take up mercury that’s long seeped into the Everglades as a byproduct of industrial processes such as waste incineration.

The biological mechanism for how the metal causes homosexual actions is not totally understood, Frederick added.

Mercury is a known endocrine disruptor—a substance that mimics or blocks the production of natural estrogen. In this case, exposed male birds’ bodies produced more estrogen than testosterone as compared with control birds.

The researchers claim they don’t understand why this happens, but then proceed to explain why it happens.  Yes, mercury is one of hundreds of known endocrine disruptors which saturate our environment and food supply.  And despite what the CDC claims, some vaccines still have mercury added to them, such as the flu shot, which is the most common vaccine today.  One of the easiest ways to create a ‘homosexual’ child is to expose him/her to endocrine disrupters while still in the womb.

Combine this phenomenon with the lowering of male testosterone levels, and you’ve got a recipe for disaster, as males especially are literally chemically neutered.  We can see how this witch’s brew of chemicals can mess with hormone levels, but if we try to correct those hormone levels, we are accused of “conversion therapy” which attempt to treat this problem.  Perhaps parents should have their children’s mercury levels checked before they opt for gender reassignment surgery.  But, then again, that would make too much sense.