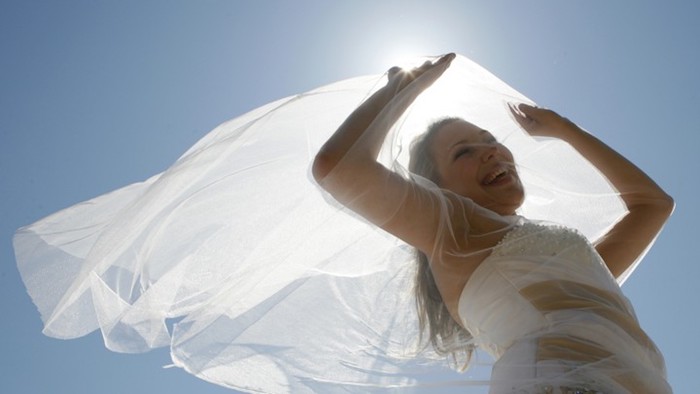 Nicholas Wolfinger, a sociologist at the University of Utah, has found that Americans who have only ever slept with their spouses are most likely to report being in a “very happy” marriage:

…Meanwhile, the lowest odds of marital happiness—about 13 percentage points lower than the one-partner women—belong to women who have had six to 10 sexual partners in their lives. For men, there’s still a dip in marital satisfaction after one partner, but it’s never as low as it gets for women

“Contrary to conventional wisdom, when it comes to sex, less experience is better, at least for the marriage,” said W. Bradford Wilcox, a sociologist and senior fellow at the Institute for Family Studies (and an Atlantic contributor). In an earlier analysis, Wolfinger found that women with zero or one previous sex partners before marriage were also least likely to divorce, while those with 10 or more were most likely.

These divorce-proof brides are an exclusive crew: By the 2010s, he writes, just 5 percent of new brides were virgins. And just 6 percent of their marriages dissolved within five years, compared with 20 percent for most people.

Other studies’ findings have also supported the surprising durability of marriages between people who have only ever had sex with one another.

In this latest study, women who have had one partner instead of two are about 5 percentage points happier in their marriages, about on a par, Wolfinger says, with the boost that possessing a four-year degree, attending religious services, or having an income over $78,000 a year has for a happy marriage. (In his analysis, he controlled for education, income, and age at marriage.)

This analysis merely suggests that sleeping with fewer people is correlated with marital happiness; it doesn’t say one thing predicts the other. Even people who have slept with the entire Polyphonic Spree could go on to live in blissful matrimony. Moreover, this analysis is not peer-reviewed; it’s just a blog post. And Wolfinger acknowledges that, because of a quirk in how the survey was worded, some of the people reporting one partner might have meant “one partner besides my spouse.”

Still, researchers I spoke with speculated about a few reasons that sexually inexperienced marriages seem so solid.

First, Wolfinger says religiousness doesn’t explain the difference between the happy virgins and the less-happy everyone else. But it could be something more subtle: People who avoid sex before marriage might simply value marriage more highly, so they feel more satisfied by it. Contrary to what pop culture might have you believe, Americans are overall a pretty chaste people. The median American woman born in the 1980s, Wolfinger writes, has had only three sexual partners in her lifetime, and the median man six. So if you have even less sexual experience than that, your significant other might be your dream man simply by virtue of being your spouse.​

“Those who have never had sex with anyone but their spouse may be the kind of people who value commitment highly,” said Andrew Cherlin, a Johns Hopkins University sociologist. “They have never been interested in sex without commitment, and once married, they may be more committed to their spouses, and therefore happier.”

The second theory is one I like to call “Not Knowing What You’re Missing.” If you were a virgin (or close to it) before marriage, you might not have had that many relationships to compare your current one with. You don’t get wistful about the hunk who got away, the one whose biggest hobbies were vegan cooking and reading novels with strong female protagonists. You are happy with whomever you ended up with, love handles and all. Maybe it’s no wonder, as Wolfinger writes, that divorce rates are higher when there are more single people in a given geographic area.

It could be that, Wilcox told me, “having more partners prior to marriage makes you critically evaluate your spouse in light of previous partners, both sexually and otherwise.”

Third, Wolfinger says, this trend “could reflect personality types that are less conducive to having a happy marriage.” To put that more gently, some people just aren’t the marrying kind. And they might be the types of people who play the field a lot before marriage.

Or, as the University of Maryland sociologist Philip Cohen puts it, “you could have a lot of sexual partners not because you’re good at sex, but because you’re bad at relationships.”

This study does not take into account race, and if race were a consideration, the results would be even more skewed toward monogamy, as White people, historically, are less promiscuous than other races not ‘constrained’ by Christian morality.

Other studies have found that once a woman has had more than 3 or 4 sexual partners, chances are she will never develop a strong, intimate bond with any man in her life.

The promotion of “sexual liberation” by the anti-Christian jewish-controlled media has one goal: the destruction of the nuclear family, which has been the foundation of stable White societies going back thousands of years.

This new “freedom” ultimately leads to enslavement to one’s own passions — if a White woman can’t commit to one partner, chances are she won’t have children — or certainly not more than one child if she’s “lucky”.

She will become convinced that all men are flawed and not worth marrying — no man will satisfy her as she is constantly comparing one man to another.

Men, too, are undermined by promiscuity, but they don’t have the same time-dependent biological imperative that women do.  The more “freedom” a women has experienced, the more likely she will remain single, frustrated, and ultimately lonely and bitter, which is why they were given this ‘liberation’ in the first place.