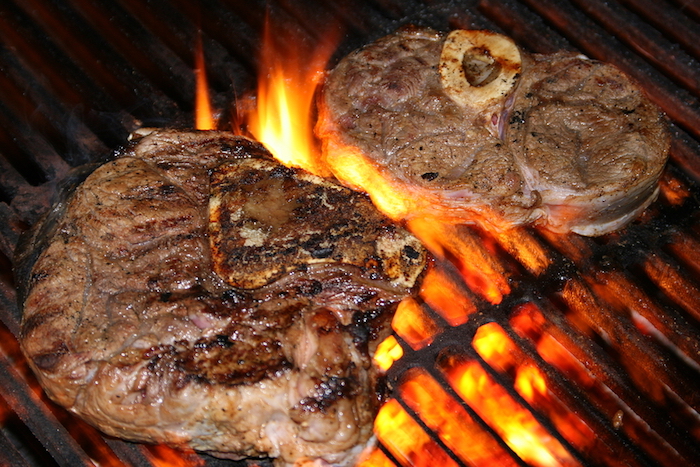 A new “study” suggests that if we don’t reduce the amount of meat in our diets, the Earth will get so hot that all of us will die in an apocalyptic scenario of droughts, floods, and desertification:

Huge reductions in meat-eating are essential to avoid dangerous climate change, according to the most comprehensive analysis yet of the food system’s impact on the environment. In western countries, beef consumption needs to fall by 90% and be replaced by five times more beans and pulses.

The research also finds that enormous changes to farming are needed to avoid destroying the planet’s ability to feed the 10 billion people expected to be on the planet in a few decades.

Food production already causes great damage to the environment, via greenhouse gases from livestock, deforestation and water shortages from farming, and vast ocean dead zones from agricultural pollution. But without action, its impact will get far worse as the world population rises by 2.3 billion people by 2050 and global income triples, enabling more people to eat meat-rich western diets.

This trajectory would smash critical environmental limits beyond which humanity will struggle to live, the new research indicates. “It is pretty shocking,” said Marco Springmann at the University of Oxford, who led the research team. “We are really risking the sustainability of the whole system. If we are interested in people being able to farm and eat, then we better not do that.”

“Feeding a world population of 10 billion is possible, but only if we change the way we eat and the way we produce food,” said Prof Johan Rockström at the Potsdam Institute for Climate Impact Research in Germany, who was part of the research team. “Greening the food sector or eating up our planet: this is what is on the menu today.”

The new study follows the publication of a landmark UN report on Monday in which the world’s leading scientists warned there are just a dozen years in which to keep global warming under 1.5C, beyond which even half a degree will significantly worsen the risks of drought, floods and extreme heat. The report said eating less meat and dairy was important but said current trends were in the opposite direction.

The researchers found a global shift to a “flexitarian” diet was needed to keep climate change even under 2C, let alone 1.5C. This flexitarian diet means the average world citizen needs to eat 75% less beef, 90% less pork and half the number of eggs, while tripling consumption of beans and pulses and quadrupling nuts and seeds. This would halve emissions from livestock and better management of manure would enable further cuts.

In rich nations, the dietary changes required are ever more stark. UK and US citizens need to cut beef by 90% and milk by 60% while increasing beans and pulses between four and six times. However, the millions of people in poor nations who are undernourished need to eat a little more meat and dairy.

Reducing meat consumption might be achieved by a mix of education, taxes, subsidies for plant-based foods and changes to school and workplace menus, the scientists said.

Where exactly is it written that guilt-ridden White “first world” countries are obligated to make sure that the Third World gets enough food to eat?  If the Third World is capable of breeding billions of mouths to feed, then they better be able to feed those mouths themselves, and if they can’t, then a natural disaster, like a massive famine, will take care of the situation.  The more we help to feed them, the more we enable them to reproduce well beyond their ability to feed themselves.  We are the cause of world over-population every time we send “relief” to these countries, and it has to stop one way or another.

Of course, the jewish oligarchs would like nothing more than to put our White societies on a meatless diet — it’s much easier for them to control millions of soy boys than it is men who are strong, healthy meat eaters.  And so they will continue with their fake global warming “science” to convince us that we will all perish if we don’t stop eating meat and dairy, which have been the basis of our European/American diet for the last 2,000 years.  Only poor Third Worlders are vegetarian — not because they want to be but because they do not have the ability to feed themselves through sophisticated animal farming.