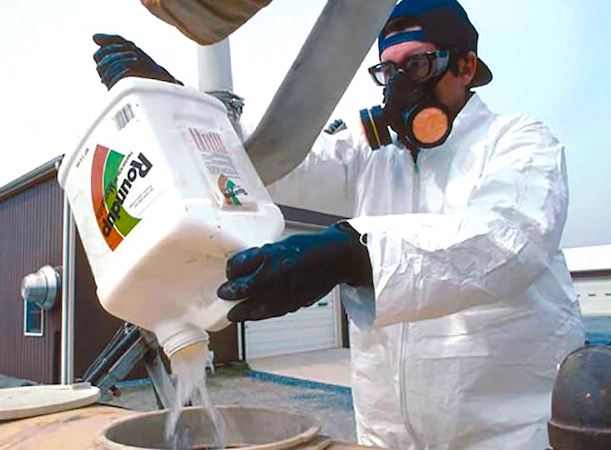 Of all the vaccines [Children’s Health Defense] tested, MMR stood out as consistently having the highest level of glyphosate contamination, which may help explain why the MMR vaccine, which contains neither mercury nor aluminum, has been implicated so often in vaccine injury and autism:

Vaccines can become contaminated in many ways. One potential source of contamination is the animal tissue (chicken embryo, fetal bovine serum, monkey kidney, etc.) that is used as a culture medium to grow the viruses contained in vaccines. The measles virus for the MMR is grown on gelatin made from the bones and ligaments of commercially raised cows and pigs, animals that have been fed a steady diet of Roundup Ready corn and soy feed. Gelatin is also used as a stabilizer in vaccines, creating another possible route of contamination.

As Roundup producer Monsanto itself has reported, the residue from glyphosate tends to accumulate in the bones, marrow, and collagen-rich ligaments of animals. Anthony Samsel confirmed this finding in his own study of the bones, marrow, and other parts of pigs and cows, as well as the derived bovine gelatin.

To provide additional evidence that gelatin is the source of glyphosate contamination in vaccines, Samsel looked at a number of gelatin-based products, including Jell-O, gummi vitamins, and protein powders. He also looked at digestive enzymes such as trypsin and lipase. He found significant glyphosate residue in all of them. It should come as no surprise, then, that all of the vaccines that list gelatin and bovine serum as ingredients tested positive for glyphosate, while those that contained neither of these ingredients tested negative.

Glyphosate may be contributing to another source of vaccine contamination. In a recent study published in the International Journal of Vaccines and Vaccination, researchers were shocked to discover a variety of toxic metals in a number of common vaccines. Platinum, silver, bismuth, iron, and chromium all showed up in the MMR vaccine. The source of these contaminants is considered to be a mystery. It is interesting to note in this context that glyphosate was first patented as a pipe cleaner due to its remarkable ability to chelate metals. It may be the case that glyphosate is playing a role in extracting metals from containers during the manufacture of vaccines.

My research leads me to believe that synergistic toxicity between glyphosate and vaccines, particularly MMR, is a major factor in the growing autism epidemic. The severity of MMR-related adverse events, as reflected in the FDA’s Vaccine Adverse Event Reporting System, has increased steadily in recent years—along with the use of glyphosate on corn and soy crops in the U.S. Some of the reactions that have become significantly more common after 2002 compared to before 2002 are seizures, anaphylactic shock, asthma, autism, eczema, irregular heart rate, and ear infection. Of course, correlation does not prove causation; it is important to understand how glyphosate residues might disrupt the body’s immune system.

Keep in mind, children were getting autism long before glyphosate was widely used by American Big Agriculture; and even if vaccines were manufactured without any trace of the weedkiller, children would still be getting autism anyway.  As Dr. Seneff points out, though, glyphosate seems to exacerbate the damage produced by the vaccines and can exaggerate the symptoms of autism.  So beware that the “Green Vaccine” movement is somewhat misleading in that even with “organic” vaccines, we’d still have children experiencing serious damage.

We cannot expect the pharmaceutical companies that make billions off these vaccines to voluntarily remove the glyphosate contamination on their own.  To make “green” or “organic” vaccines would cost billions extra, and as long as Big Pharma continues to enjoy legal protection from being sued by the public, what would possibly motivate it to change just because it’s the right thing to do?  It will take multiple billion dollar class action lawsuits against Bayer-Monsanto, the manufacturer of Round-Up,  by parents of children damaged or killed by these vaccines before anything gets done.