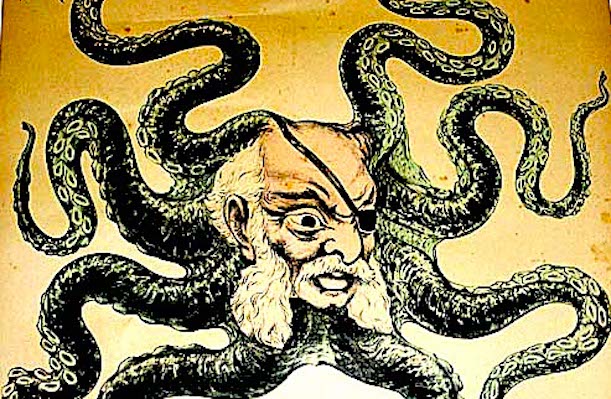 (Israel National News) A new survey, sponsored by a Jewish advocacy group, found that a whopping 20%, or potentially 150 million out of a population of over 700 million, of Europeans believe that a ‘secret network of Jews influences global political and economic affairs’:

That’s the feeling among a fifth of the 16,000 respondents to a survey among Europeans from 16 countries.

The same number also agreed with the statement that “Jews exploit Holocaust victimhood for their own needs.”

The survey was presented Monday at a conference about anti-Semitism organized in Paris by the European Jewish Association. It was conducted in December and January in Austria, Belgium, the Czech Republic, France, Germany, the United Kingdom and Poland, among other countries.

* A quarter of respondents agreed with the statement that Israel’s policies make them understand why some people hate Jews.

* More than a quarter concurred with the statement that “Israel is engaged in legitimate self-defense against its enemies.” A quarter of respondents disagreed and 46% did not express a position.

* More than a third agreed with the assertion that “During World War II, people from our nation suffered as much as Jews.”

In each of the countries polled, a representative sample of 1,000 adults was presented with 45 questions or statements in face-to-face interviews about Jews and Israel, according to the Action and Protection League. The survey has a margin of error of 0.8%.

Koves said his group is still working on a breakdown of the results in each country, but it’s complicated “by challenges in the collection process,” noting the difficulty of finding pollsters willing to go into the poor neighborhoods and ghettos of Paris and Brussels, for example. That, he said, “is necessary for arriving at a representative sample.”

Almost 100 years ago, Maj.-Gen. Count Cherep-Spiridovich, in his book “The Secret World Government or The Hidden Hand,” warned the world that a secret jewish cabal of 300 Jews, under the control of the Rothschilds, were the de facto rulers of the world, and nothing has changed, as the results of this survey shows.

Encouragingly, the results were based on relatively affluent  and middle class White Europeans, and did not include the much more antisemitic Muslims who live in these ‘no-go zones’ that were not included because even the jewish survey takers were afraid to go into them.

But because these interviews were done ‘face-to-face’ and not over the internet, it’s far more likely that respondents down-played their ‘antisemitic’ views so as not to look ‘evil’ in the eyes of the interviewers.  The real levels of ‘antisemitism’ are obviously higher.

But these are jewish definitions of antisemitism, which skew the results.  For example, if you don’t believe that Jews suffered more than anyone else in World War II, you’re an antisemite.  They have cornered the market on suffering, and only a ‘Nazi’ would believe otherwise.

Overall, though, these results are encouraging, especially the success that historical revisionism is having in Europe, apparently in the predominantly Christian eastern countries more than the Judaized West.

Jews mistakenly believe that they can greatly reduce or eliminate antisemitism not by changing their behavior but rather by making ineffective Holocaust indoctrination mandatory in schools, along with simply making it illegal to criticize Jews with the threat of prison as a deterrent.

The internet has been a disaster for the Jews who formerly had an absolutely monopoly on the information that the public was allowed to see and read in the media, which is why they are working feverishly to shut down the internet or throw people in jail for posting anything they don’t like, even the elderly.

And all the while they continue to insist, despite all decency and common sense, that their behavior has nothing to do with antisemitism, ever.