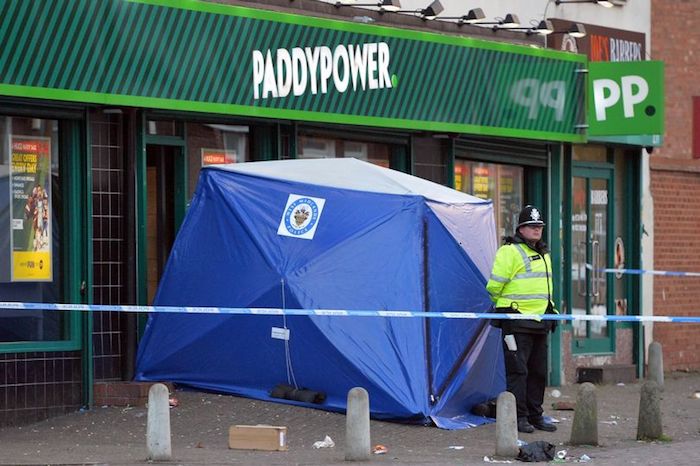 A Sudanese migrant beheaded his former roommate in an off track betting shop in Birmingham, but may not face prison because he may plea innocent “by reason of insanity”:

A former medical student used a knife to decapitate a customer in a betting shop and then mutilated the victim’s face and one of his hands, a court has heard.

Hassan Mustafa, 35, is alleged to have beheaded his former housemate Khalid Yousef after a Paddy Power manager set off a “fog cannon” in an effort to halt the attack.

The jury at Birmingham Crown Court was told an apparently calm Mustafa was arrested by armed police as the smoke from the anti-robbery device lifted.

The jury has been told it will be invited to consider a “special verdict” of not guilty of murder by reason of insanity.

Opening the case against Mustafa on Monday, prosecutor Jonathan Rees QC said the defendant and Mr Yousef were Sudanese nationals who sought asylum in the UK five years ago, initially living in Liverpool.

A few minutes later, Mustafa, formerly of Stratford Road, Sparkbrook, entered the shop armed with up to four knives, the court heard, and asked Yousef outside, where they began fighting.

Mr Rees told the jury: “As events unfolded, the defendant pursued Mr Yousef into the shop brandishing a large kitchen knife which he used to attack him.

“Mr Yousef was soon overcome and unable to resist. The manner in which Khalid Yousef met his death was horrific.

“The evidence from the pathologist establishes that the cause of death was decapitation. In addition to the head being severed, the body was mutilated in other ways.”

The pathologist observed that the mutilation had been “carried out with some skill” – possibly reflecting on the training the defendant received studying for medical qualifications.

Describing Mustafa’s arrest by police, the prosecutor added: “As the smoke cleared, they saw the deceased lying on the floor with the defendant standing over him.”

Mustafa was taken to a psychiatric unit but exercised his right not to answer questions about the death before being charged with murder.

Keep in mind that this head hunter was among the “best of the best” immigrants — a “valuable” medical student.  If this is how the best of them behave, what are they hiding about the rest of them?

There is likely no insanity plea for murderers in the Sudan, because beheadings occur every day there — so it’s only natural that they would bring their culture of decapitation with them and enrich England with it.

And of course, the BBC ignored this gruesome story — after all, it would be “racist” to report it because it would “incite racial hatred,” and the BBC doesn’t want to go to jail for telling the truth about what’s really going on in England virtually every day.