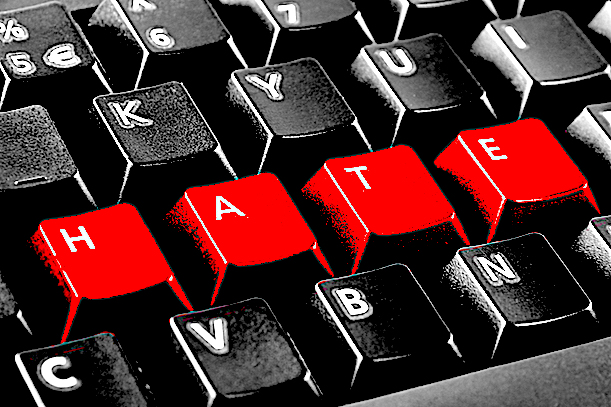 In complete contradiction to the official narrative of the Anti-Defamation League, online so-called “hate speech” does not, in fact, lead to an increase in real-world hate crimes, according to a suppressed Federal report:

The report was sent to Congress by the Department of Commerce in January, but is yet to appear on any government website.

The report….was prepared by the National Telecommunications and Information Administration(NTIA), which is under the Department of Commerce. It’s purpose was to revise the findings of a similar report by NTIA from 1993 titled “The Role of Telecommunications in Hate Crimes.”

“The evidence does not show that during the last decade, a time of expansive growth of electronic communications, particularly on the Internet and mobile devices as well as social media, there has been a rise in hate crime incidents,” the report states.

The report alleges that research into extremism fails to present data showing “any causal relationship between increased social media use and increased violence.”

The report also cautions against efforts to crackdown on online speech over the baseless concerns about hate crimes. “We caution that efforts to control or monitor online speech, even for the worthy goal of reducing crime, present serious First Amendment concerns and run counter to our nation’s dedication to free expression. To quote President Barack Obama, “The strongest weapon against hateful speech is not repression; it is more speech.””

“Given that all the major social media platforms have rules against hate speech and, in fact, employ sophisticated algorithmic artificial intelligence (AI) approaches to enforce these often vague and contradictory rules in a manner also used by tyrannous regimes, it is appropriate to ask what they gain from it. Certainly, as this Report shows, the platforms have no reasonable expectation that their censorship will end hate crimes or even diminish it, as no empirical evidence exists linking increased hate speech with hate crimes.

“Further, this censorship poses real dangers to our political system. Under the hate speech prohibitions and other censorship rules, the platforms have removed content that many consider seriously engaged with pressing political and social issues.”

The revision of the NTIA’s 1993 report was requested under the Trump administration. However, it was during the reign of the 116th Congress, where Republicans had a small majority in the Senate, and Democrats controlled the House with a majority of 35 seats. So, it is rather baffling that the report has not been made public.

Sources familiar with the drafting of the report allege that the report is being suppressed by establishment politicians who have much to gain from the “hate crimes” panic. The conclusions of the report contradict the mainstream media’s narrative of increased real-world hate crimes inspired by online hate speech.

“Reports like this are typically made public,” said a source who worked closely with the NTIA on the report. “I don’t know why this report isn’t up on a government website yet. It’s already been submitted to Congress, it’s not a private thing anymore. I suspect the Civil Rights Division might have something to do with it.”

The Civil Rights Division, which is part of the DoJ, is responsible for prosecuting hate crimes. The source claimed that it opposed the updated report, adding that the division is leading the “efforts to drum up hysteria” over white supremacy extremism.

The ADL has been pushing this false causal relationship between online “hate speech” and real world “hate crimes” — and they’ve partnered with the Department Of Homeland Security to help push this bogus agenda.

Of course, the only online “hate speech” they are concerned about is by “White supremacists” and “Neo-Nazis” — or just plain old run-of-the-mill conservatives.

And this policy is in direct contradiction to the findings of the Southern Policy Law Center that found that militant Black Nationalists are the most violent of all “extremist” groups in America.

But we can’t allow facts to get in the way of our anti-White agenda.

By Facebook standards, each day there must be literally tens of millions examples of “hate speech” online — but real world “hate crimes” are few and far between — and over 70% of those reported “hate crimes” turn out to be hoaxes.

Inter-racial violent crime in this country is overwhelmingly Black-on-White — but it is never investigated as a “hate crime” — even though the media tells Blacks that all their problems are caused by “racist” White people — who need a little “pay back”.

Black-on-White crime has become just another form of “reparations” for slavery.