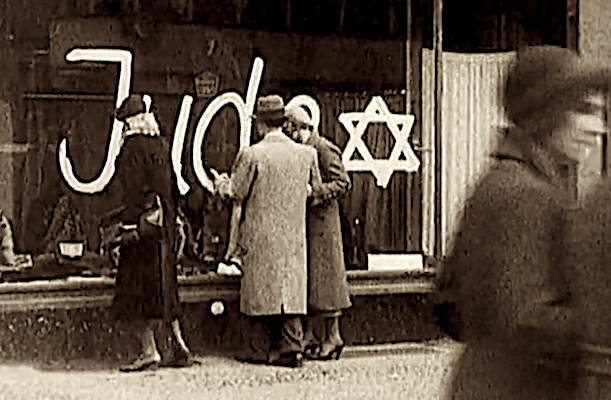 Nazi “Brownshirts” are roaming the streets of America randomly attacking hundreds of thousands of defenseless Jews for no reason whatsoever — that’s one of the takeaways we get from two surveys published recently by the American Jewish Committee:

The Jewish survey found that a large majority of Jews consider anti-Semitism a problem, and that most see it as a problem on the right and in the Republican Party. Those findings were in line with what the AJC, a nonpartisan advocacy organization, found when it surveyed American Jews last year.

But nearly half of Americans overall say they have seen antagonism against Jews either online or in person during the past five years, suggesting that respondents may be familiar with the reality of anti-Jewish bigotry but unfamiliar with the term “anti-Semitism.”

Holly Huffnagle, AJC’s US director for combating anti-Semitism, said she believes using the term anti-Semitism is important because it covers a broad historical spectrum of how anti-Jewish discrimination manifests — from conspiracy theories to stereotypes to slurs.

“I think this is an opportunity for education on what anti-Semitism is,” she said. “If someone would have said ‘Jew-hatred, do you know what that is,’ or some other term, I think we would have seen that number a little bit less, but we need the term anti-Semitism to be understood.”

The surveys were taken in September and early October and included 1,010 Americans overall and 1,334 Jews. The margin of error for the general America sample was 3.7% and 4.2% for the Jewish sample.

In this year’s survey, 43% of Jews said the status of Jews in the United States is less secure than it was a year ago, while 52% say it’s about the same and 4% say it’s more secure. Those numbers are also essentially the same as last year’s.

“What American Jews and the general public are saying in these surveys, for us, is a clarion call for a stepped-up, multi-pronged response to rising antisemitism in the United States,” said AJC CEO David Harris in a statement.

…While 77% of Americans overall believe that saying “Israel has no right to exist” is anti-Semitic, 55% believe it’s anti-Semitic to say “The U.S. government only supports Israel because of Jewish money,” and half say the statement ““American Jews are more loyal to Israel than to America” is anti-Semitic.

When you actually multiply these alleged percentages out over the entire U.S. population, you get a vivid insight into just how paranoid and delusional Jews are on the whole — and how utterly preposterous these survey results are.

In their own minds, there is a literal reenactment of Kristallnacht every day of the year in America.

And apparently if you “attack” their economic prosperity in anyway — such as stealing a hat — you are literally trying to “genocide” them.

There must literally be thousands of Jewish organizations and institutions in America — yet this survey claims that 40% of them have been victims of some kind of “threat” or direct attack.

Since the Jews have openly admitted they control the media — especially Hollywood — if all these attacks were truly going on, we’d hear about it non-stop 24/7 on their media machines like CNN and FOX, but we don’t because it’s not happening.

And if it’s not happening, then the only rational conclusion we can come to is that the Jews surveyed are either bald-faced liars or suffer from a extreme schizophrenic persecution complex with associated ideation of imaginary physical attacks.

We could certainly blame some of this on the relentless and manipulative non-stop “Holocaust” propaganda that Jews are subjected to — but their propensity to lie about some imminent and violent danger facing them clearly proceeds World War II.

And if we point out — as the Vatican did in World War II — that Jews have a propensity to grossly exaggerate, we will be accused of “persecuting” them — or wanting to literally kill them just because they are Jews.

But Jews themselves know they exaggerate — which is why neither Stephen Wise, the Chief Rabbi of the United States, nor the Jewish Supreme Court Justice Felix Frankfurter believed early reports of Jewish “slaughters” in Europe during WWII.

And if these prominent and “credible” Jews knew better than to believe their hysterical accounts of persecution, perhaps we, too, should conclude these regular surveys on Jewish persecution in America are intentionally exaggerated in order to justify draconian “terrorism” laws to protect Jews from any criticism whatsoever.

Their ultimate goal is to “bring back” the death penalty for antisemitism — any antisemitism.