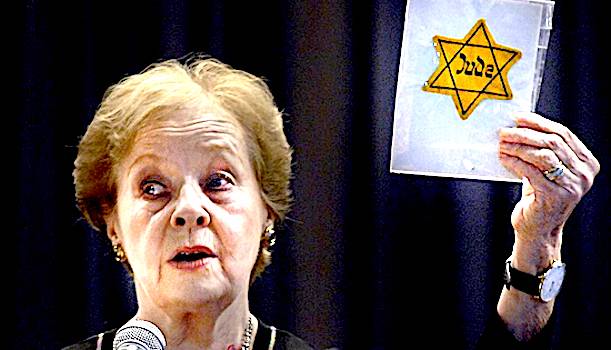 While Holocaust education on its own brings about the above discussed qualities of empathy, tolerance and open mindedness, the inclusion of survivor testimony within the curriculum “is strongly associated” with “higher critical thinking skills, a greater sense of social responsibility and civic efficacy” in early adulthood.

“This survey only confirms what we have heard anecdotally from teachers and parents for years—that Holocaust education is effective not just as an important history lesson, but also in equipping students with the tools to identify bias and confront it when necessary,” said ADL CEO Jonathan Greenblatt.

The questionnaire, conducted by Lucid Collaborative LLC and YouGov, sampled 1,500 college students between the ages of 18 and 24. Some of the students in the sample underwent Holocaust education in high school, others did not – attempting to put a finger on the differences between the two educational approaches.

What they found is that eight out of ten students confirm having some sort of Holocaust education present in their high school curriculum – the majority of which was a month or less of dedicated time on the subject. Some 55% reported hearing survivor testimony within the studies.

“The study provides strong evidence of the positive impact of Holocaust education on student attitudes regarding diversity and tolerance in the face of hate. These attributes are sustained over time as students transition into young adulthood,” said Claudia Ramirez Wiedeman, PhD, USC Shoah Foundation Director of Education and Evaluation. “It is also promising to see that the effects of Holocaust education are amplified by the use of survivor testimony in the classroom.”

According to the survey, this form of education leads to a more “pluralistic attitude,” such as “being more comfortable” around different races or those of a differing sexual orientation. Additionally, those with Holocaust education are “more likely” to call out biased information (28%), stand up to intolerant behavior (12%) and denounce stereotyping (20%), than those without. The survey noted that students with Holocaust education were also 50% more likely to offer help in a bullying scenario.

The results of this survey completely contradict a survey from 2019 which concluded that such Holocaust education programs are failing miserably with young people.

A prominent Holocaust educator in the U.K. wanted teachers to stop using the term ‘antisemitism’ because students didn’t even understand what it was.

And a former Israeli Education Minster admitted Jews promote the Holocaust as a “trick” to silence their critics.

If Holocaust indoctrination makes children accept and trust adult transexual predators, then that alone should make parents demand that it be removed from all school classrooms.

Clearly, Holocaust indoctrination doesn’t increase ‘higher levels of critical thinking’ — it does the exact opposite — it persuades children to throw all rationality out the window and trust their vague “feelings’ of empathy.

After all, if students were encouraged to develop and use their ‘critical thinking skills’ at all, they’d know that the entire Holocaust narrative is illogical, implausible, and contrary to the fundamental laws of science.

Indeed, the Holocaust is real only in their own minds.