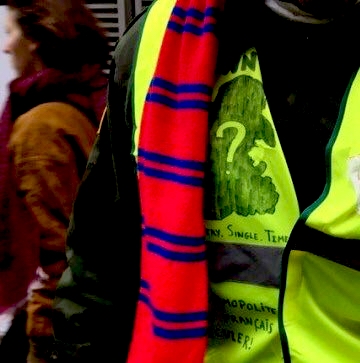 A new study claims that up to 25% of the French population not only believe in a conspiracy of “elites” but also think those same elites are using mass migration to replace European populations:

The study, released by Jean-Jaurès Foundation and Conspiracy Watch, is the second of its kind and looks at the extent to which the French believe in various so-called conspiracy theories.

The study found that 27 per cent of French believe in an “Illuminati” of elites who control the population while one quarter say they believe in the theory of the “Great Replacement,” Le Point reports.

The theory of the Great Replacement was coined by French writer Renaud Camus and encompasses several subjects under the broad scope of interchangeability and exchangeability, from goods and services to people themselves…

…Just over one-fifth of the respondents in the Jean-Jaurès Foundation survey claimed there was a “global Zionist” conspiracy while 43 per cent said they believed the French Ministry of Health and drug companies were working together to hush up the harmful effects of vaccines.

Of the ten theories listed in the survey, only 35 per cent of the respondents said they did not believe in any of them.

Rudy Reichstadt, director of Conspiracy Watch, commented on the results saying, “Conspiracy is no longer a marginal phenomenon, but runs throughout French society.”

Despite all the money and effort the media has spent to discredit the idea of a jewish conspiracy, it seems to be more popular than ever in France, where they are polite enough to called it a “Zionist” plot.  After all, we don’t want people to think that ALL Jews are involved in this global plot — that would be antisemitic.  In France, they are still trying to figure out if being anti-Zionist is actually antisemitic, but until they decide, Zionist will be the preferable term.

We’ve all been told by our teachers that jewish conspiracy theories were discredited once and for all when we defeated the Germans in WWII, but apparently the opposite has happened.  Despite the unprecedented spending on Holocaust education, more people than ever believe that there is a secret jewish cabal that wants to replace the European people who are their historical enemies with Arab and African invaders.  How will Jews do a better job convincing the goyim that they have nothing to do with what is unfolding on the world stage?