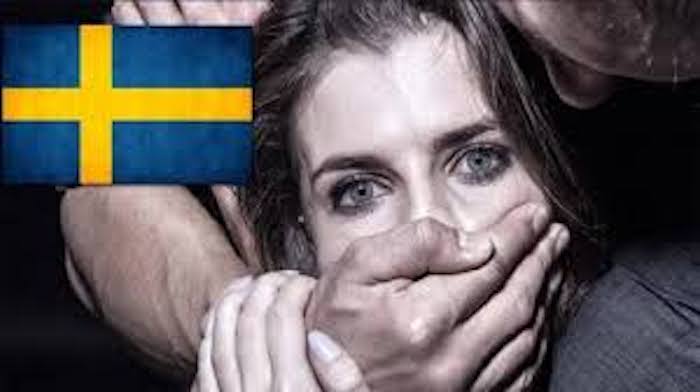 The Swedish police and court system are looking for literally any excuse to let their pet Muslim invaders off the hook for the most heinous of violent crimes, especially the now-common gang rape:

Four men have been charged with gross rape against a developmentally disabled woman. Yesterday they were set free. Why? The court could not prove that they knew she had a developmental disability.

The woman is 18-years-old and has an intellectual disability. She is described by friends and family as having the cognition of a five or six-year-old, according to the judgement.

On Saturday 5 May she met one of the men in Stockholm at the T-Centre. They began to talk and then took a train towards Hässelby and then a car from Abrahamsberg’s underground station in Bromma to an apartment where two more men were and a fourth man joined them eventually.

The woman said the four men held her arms and legs, beat her and raped her. All four men denied the crime, two said they had intercourse but that it was voluntary. A third man’s sperm was found on her knickers.

There was no evidence against the fourth man, a 17-year-old. However, even the other three who either admitted or had evidence of having had intercourse with the woman were released by Solna District Court.

The court asserts that it was not established that the woman had been subjected to violence, despite an examination two days after the attack finding eight bruises on her leg and two on her arm, which would seem to correspond with her version of events. The District Court considers that she may have obtained the bruises at another time.

Though the court agreed with the prosecutor that the woman was in a vulnerable position due to her disability, the court was unable to prove that the men understood her developmental disability.

Sweden is quickly sinking into the abyss from which they will not recover. They literally worship at the feet of these brown beast invaders who feed off them–and rape them and their culture–without fear.

Arabs understand only fear and punishment, and the Swedes give them neither–and the result is chaos.

How many more of these horrific stories can the Swedes take before they say “no more”?

Do the Swedes even have a breaking point, or are they already completely broken–morally bankrupt? I’m sure it’s no coincidence that White Swedes have the highest rate of atheism in Europe.

Contrast them with the Poles, and see the results.