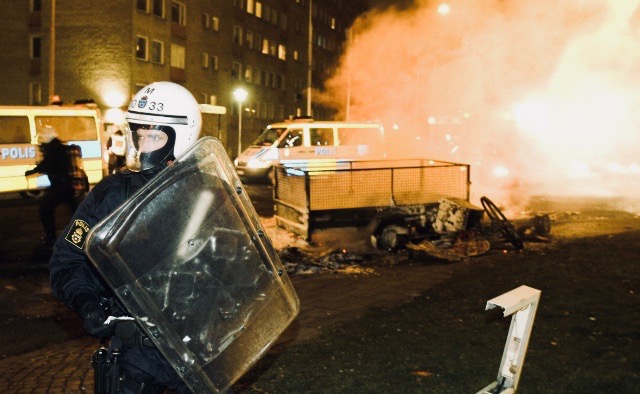 Sweden is now sending a coffee truck into Muslim gang-infested neighborhoods in an attempt to placate the violent illegal migrants with free coffee and sandwiches:

In addition to serving coffee, the bus will also function as a base to “build relationships” with the criminal migrants. The hope is that the relationship building will help influence the youths with “advisory and motivated talks”.

The bus will primarily be up-and-running in evenings and nights during the weekends and ambulate between a number of “messy places” in Gothenburg.

One of the founders, Emma Forsyth, says that the philosophy behind the project is “satisfied people are calmer people” – with a hot cup of coffee and a sandwich in the stomach, it is believed that the inclination to commit crimes will decrease among the individuals in the target group.

Some of the gangs are so-called Moroccan street children who reside illegally in the country. After they’ve been served coffee and a sandwich they will be offered shelter at a church open nights for homeless people.

For these “youths at risk”, it is hoped that a conversation over a cup of coffee will function as a first step for them to leave life of crime and start a new life.

“It may be banal”, says Emma Forsyth, assuming that the project is likely to face criticism from those who believe that crime should be resolved with police action and illegal immigration with expulsion. “But sometimes what’s simple is also effective”.

Lotta Mosander, responsible for coordinating the security work in Nordstan, agrees with Emma Forsyth. The bus means there will be a few more adults in Nordstan, which she believes will lead to a safer environment.

But at the same time she is forced to acknowledge that the police have made great efforts to clean Nordstan up lately – and that is what has made the place calmer and more secure.

There is still a lot of crime and drug dealing at the site, however. Therefore, the coffee bus is needed, she says. Similar projects previously tested in Stockholm and Malmö failed to yield positive results.

Other projects in the same category – such as “don’t touch me” wristbands for women and anonymous name badges for nurses have also failed or made little or no difference.

America has tried to “buy off” the Blacks here to the tune of over a trillion dollars in benefits, set asides, affirmative action, free cellphones, and direct cash payments, but all of it has done nothing but worsen the average Black life.  Despite all this pandering to Blacks, they are more violent and impoverished than ever before.

It’s the free “goodies” that socialist Sweden offers that attracted these Muslim welfare leeches in the first place–and if anything these “freebies” embolden them into feeling entitled and above the law.  Muslims don’t want to “dialogue” with the Swedish community volunteers — they want to rob them and rape them.

No doubt, Muslims see this coffee bus as a sign of weakness–as a sign that they are winning the battle of the streets.

Swedes might as well fly white flags on their police cars.