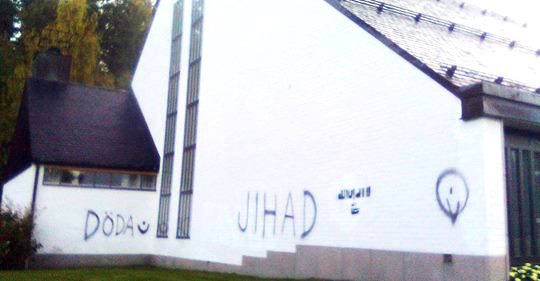 In an obvious effort to protect Muslim criminals who made serious death threats against them, a church in Sweden decided to not report the threats to the police:

A Church of Sweden representative admitted that graffiti sprayed on a local church that included words like “jihad” and “kill” was not the first instance of religious hatred in this particular town. Nevertheless, the clergy decided not to comment on this matter in the hope that the attacks would die down; it was presented as “innocent” vandalism.

Alhemskyrkan Church in the town of Skellefteå was vandalized by Islamic religious extremists as perpetrators sprayed hateful and threatening messages on its white walls in black ink. Nevertheless, the story was conspicuously absent from major Swedish media, the news outlet Samhällsnytt reported.

On September 3, the church staff discovered that the house of worship had been desecrated with graffiti; the intimidating messages included words like “jihad” and “kill.” According to the local newspaper Folkblad Västerbotten, the police said they were particularly serious about this form of hate attacks against churches, and that they didn’t regard them as belonging to the same category as regular “tags” popular among teenage street gangs.

The Church of Sweden and Swedish Radio instead chose to downplay the incident as innocent scribblings, without even mentioning which church was vandalized or the explicitly anti-Christian nature of the graffiti.

Church of Sweden Communicator P-O Sjödin said that the clergy made an active decision not to comment on this case and instead decided to “lie low” in the hope that the graffiti attacks would simply stop and be forgotten. At the same time, Sjödin admitted that it is not the first time a church in Skellefteå had been defaced, something he found “shameful and regrettable.” In the same interview with Swedish Radio, Sjödin called the perpetrators of the attack “rascals.”

In May this year, the defacing of St. Olov’s church in the very same town with the word “jihad” triggered a public uproar, as Swedish national broadcaster SVT chose to unpublish a photograph of the vandalized church it deemed “too sensitive” to be shown. The very same church communicator P-O Sjödin added insult to injury by claiming the “jihad” graffiti to be a “common doodle.”

Jihad is an Arabic word originally meaning “striving.” However, in many Islamic contexts it denotes the desire for holy war.

The church obviously didn’t report this crime because they don’t want the criminals to be deported or imprisoned.  On top of that, the church is doing its part to protect Muslim invaders from any backlash or “islamophobia”.  We see this same denial when Swedish women get raped by Muslims — they are hesitant to even report the rape because they don’t want the police to accuse them of being “racist”.

But imagine if this had been a jewish synagogue that had been defaced with antisemitic graffiti.  It would have been an international scandal — and there is no way that the Jews would have dropped the case until the perpetrators had been caught, prosecuted, and jailed.  The Swedes are sending the Muslim invaders a clear message: do what thou wilt, but just don’t do it against our Jews.