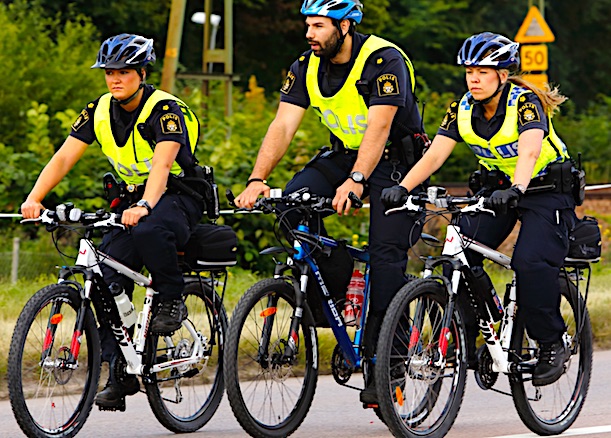 Last weekend, residents of Nacka, Sweden were shocked to hear that two neighbor residents were hit by bullets fired by migrants who were using an illegal automatic rifle:

Police were alerted to gunfire in Nacka at 8:57 pm on Sunday. Witnesses say that the shooter fired upon a multi-family apartment building and at a taxi.

According to Aftonbladet, the driver of the taxi and one person in an apartment were hit by shots which allegedly came from an automatic rifle.

The individual who was found injured in an apartment was reportedly hit by a ricochet.

As for the taxi driver, he is believed to have some connection with the three shooters.

“We can say that they were shot, but exactly how the injured received their injuries, it is too early to say it,” said police spokesperson Carina Skagerlind.

“The events are being investigated as an attempted murder,” added Skagerlind.

Following the incident, 56-year-old Anders who lives in the neighborhood told journalists from Expressen that he intends on selling his apartment and moving to Värmdö.

“In Nacka, it is not possible to stay,” he says.

Police have confirmed that three men have been arrested and were subsequently questioned about the shooting. One of the individuals is said to have links to one of the most recent shootings in Stockholm, Aftonbladet reports.

The shooting is the third that has occurred in Sweden in just two weeks.

The use of guns for any other purpose than hunting and target shooting is essentially prohibited in Sweden, and much of Western Europe.  So predictably, only police and criminals use weapons outside these legally prescribed activities, and legal gun owners are not allowed to use their weapons even to protect themselves against criminals who are using illegal guns against them on their own property.

For this simple reason, there are now many “No Go Zones” across Sweden where even police are afraid to enter because the criminal migrants are better armed than they are, and the criminal penalties for illegal gun use don’t deter anyone.  Remarkably, despite the fact that law-abiding citizens are powerless to defend themselves against these well-armed criminals, the Swedes are still overwhelmingly against the use of privately-owned guns in self-defense.

After all, how will these criminal migrants ever successfully “integrate” into Swedish society if they are shot and killed during a home invasion or attempted rape?