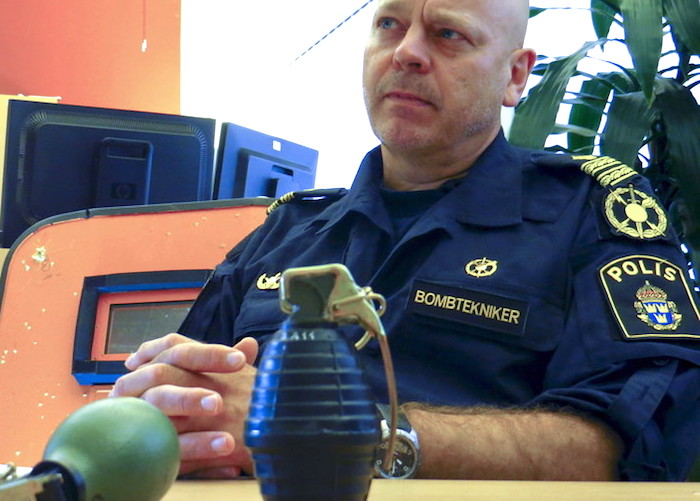 In a desperate attempt to curb an ongoing spate of hand grenade bombings that have become regular occurrences across Sweden, police officials will grant “hand grenade amnesty” for Muslims who voluntarily turn in their explosive devices:

Sweden has introduced a temporary amnesty for anyone in possession of hand grenades and other explosives, urging the public to turn in their illegal arsenals before mid-January, with no legal consequences or questions asked.

Facing a massive surge in gang-related crimes, in particular involving the use of hand grenades, police in Sweden have introduced a three-month-long amnesty for “explosive goods.” From this week until January 11, 2019, anyone in possession of explosives, which have not been used in criminal activity, can turn them over to the authorities without being detained.

“Anyone who contacts the police voluntarily during the amnesty will not be charged with illegal handling, and has the right to remain anonymous,” the national police said in a statement.

While the public is urged to surrender the listed goods, which include hand grenades, gunpowder, igniters, and pyrotechnical items, they are asked to avoid driving to the police station to hand over the items. Out of public safety concerns, authorities insist that “police takes care of the explosive goods,” after arranging their collection via a call center.

“We all want a safer and safer society. Amnesty is a way we hope to help reduce the incidence of, for example, hand grenades [being used] in criminal environments,” the police said.

Sweden is known to have granted amnesty for possession of firearms as means to combat the plague of organized crime in the country. During the last such pardon period, which ended in April of this year, authorities managed to collect 11,400 illegal weapons from the public. This week’s measure, however, is the first time that police agreed to grant amnesty for explosive goods.

“Police authorities see a development involving criminal individuals handling and using firearms to an increasing extent,” the National Intelligence Center (NUC) highlighted in their latest report. “It should also be noted that Sweden is the only EU country that sees hand grenades so widely used by criminal actors.”

According to police, bombing incidents involving hand grenades have been on the rise in recent years. Last year, at least 21 hand grenade explosions were recorded in Sweden, compared to 35 detonations in 2016 and 10 in 2015. Most of the illegal weapons entered Sweden from the Balkans and are old weapons stock from the wars in the former Yugoslavia.

Sweden which, per-capita, accommodated the highest number of asylum seekers during the migrant crisis of 2015, over the years has seen a sharp rise in crime rates, especially in Stockholm and Malmo. In February this year, authorities introduced the ‘Sluta Skjut’, or ‘Stop Shooting’, a pilot program in Malmo, aimed at lowering gun crime rates based on a US approach.

As part of the initiative, last Thursday, the city’s police held a secret meeting with members of organized crime groups in the city. The confidential forum held at the football stadium was staged to convince the gangs to bring an end to hostilities which had been troubling Sweden’s third largest city.

Remarkably, this is not a satirical “fake news” story.  The Swedes seem to be under the naive assumption that they can negotiate with these Muslims who fully intend to invade, take over, and dominate Sweden.  These Arabs have already intimidated the Swedish police to the point that they are afraid to even go into Muslim neighborhoods, so why would these terrorists listen to anything the police have to say?  Muslims see Swedes as weak and inept, spineless and accommodating, so what would motivate them to turn in their weapons of conquest?

There’s only one thing Arabs understand — overwhelming and unapologetic force.  And until the Swedish authorities unleash whatever military force they have to squelch this Arab uprising, there will continue to be innocent Swedish blood shed.  These Muslims need to be surgically uprooted — or as the Germans say “ausrotten”–and given a one-way ticket back to the desert land they came from.

Any form of tolerance will be seen as weakness, but unfortunately the Swedes take great pride in their “tolerance” which will lead only to their annihilation as a people.