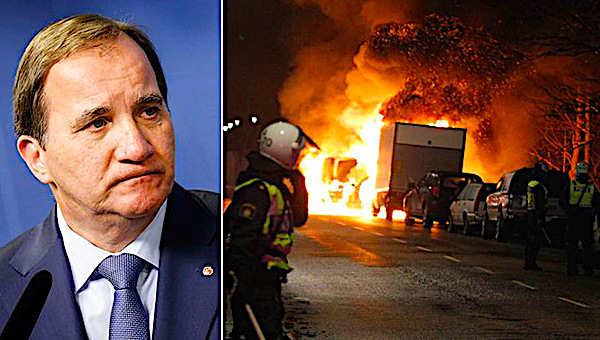 Sweden’s embattled Prime Minister Stefan Löfven has been given a vote of no confidence in a recent opinion poll for, among others, pinning the migrant crime wave on predictable Marxist scapegoats like ‘segregation’ and ‘social injustice’:

Swedish Prime Minister Stefan Löfven has landed in hot water over a series of interviews in which he consistently denied any link between immigration and the problems many believe it has entailed, such as a wave of violent crime that swept Sweden’s migrant-heavy suburbs.

In an interview with national broadcaster SVT, Löfven said that the explosion of gang violence was impossible to predict and that the suburbs would have experienced the same problems anyway. Instead, he pinned the criminal wave on “segregation” and “social injustice”.

In a subsequent interview with Dagens Nyheter, one of the nation’s leading dailies, the embattled prime minister, who has seen the support of his Social Democrats party drop to record lows, defended his stance, insisting that the main problem was segregation.

“It is impossible to ethnify crime and say that it depends on being born in a certain place or having a specific skin colour or background”, Löfven said, blaming crime on adverse socio-economic conditions, such as deficient language education and slim chances of entering the labour market, which, in turn, lead to segregation.

Despite the fact that Sweden has refrained from mapping criminals’ ethnicity since 2005 due to ethic considerations, independent reports have pointed out migrants’ over-representation in a number of crimes, including rape.

In late 2017, an independent report suggested that migrants, who by conservative estimates from Statistics Sweden constitute about a fourth of the country’s population, were severely over-represented in crimes of a sexual nature, accounting for over 90 percent of rapes and gang rapes.

While Löfven specifically ran on a platform of weeding out crime and claims to have pursued this goal from day one, his failure to curb rampaging violence, such as gang shootouts and explosions, may spell his downfall.

A survey performed by pollster Sifo on behalf of the newspaper Expressen has indicated that voters have low confidence in Löfven’s ability to tackle gang violence and organised crime, which were identified among the most burning issues facing Sweden.

Socialists and their communists flunkies tried to push this Marxist explanation for Black crime in America starting back in the 1930s.  And they were the same ones who falsely claimed that racial “segregation” was the “evil” that caused these poor, under-privileged ‘people of color’ to commit murder and rape.

Many of these “New Swedes” from Arab and African countries were criminals before they arrived, so to blame their criminality on “segregation” is cynical chutzpah for these nation-wreckers.

In 2016, the Prime Minster went on television to reassure the world that the migrants were not behind the massive wave of sexual assaults and rapes.  Did anyone seriously believe him?

In reality, the only thing that will save Sweden is racial segregation, the way the human body creates a tumor to isolate cancer  from the rest of the healthy body, because if the tumor is allowed to spread, the entire body will eventually succumb to the disease of diversity.

Think of diversity as the Tay Sachs of social diseases.

There is indeed a “color of crime“, and the faster Sweden comes to terms with that racial reality, the sooner it can deal with this scourge of multiculturalism before the nation dies.