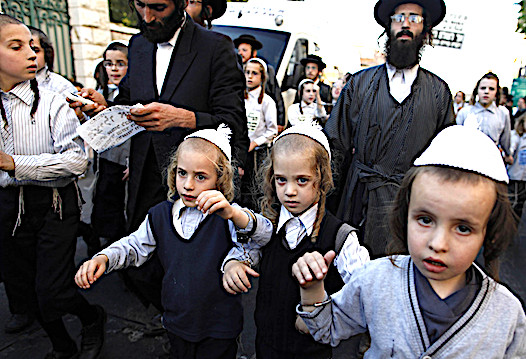 Tens of thousands of pedophiles operate in Israel every year, leading to about 100,000 victims annually, according to an Israeli pedophile monitoring association:

The Matzof Association, an organization that actively keeps track of reports on pedophiles in various media and centralizes the data monthly, states that in July alone, 22 cases of pedophilia were reported in Israel and brought to the attention of the media. The vast majority go unreported.

“In Israel, tens of thousands of pedophiles operate on a daily basis without any problem,” said Eliran Malki, head of the Matzof Association.

“They are not deterred by the police and certainly not deterred by the contemptuous rulings that come from the hands of judges in the various courts,” he added, citing an incident in which one particular pedophile was let off by the courts without punishment, despite evidence of thousands of pedophilic items found on his computer, as the court stated that it would “harm his career.”

The court does not count the number of victims, and shows disproportionately favorable treatment of the perpetrators, according to Malki.

The association gathers reports from the media in order to form statistics, as no public sex offender registry in Israel currently exists.

“Matzof will continue to report and follow these trends month after month. Statistics tell the story of the victims, and they are living proof why we must fight for the establishment of a public pedophile database,” he added.

A number of pedophiles in Israel are Jewish immigrants who have sought refuge in the country under the law of return, according to a CBS report published in February.

The CBS reporter joined Jewish Community Watch (JCW) activists as they were looking for Jimmy Karow, who fled the US in 2000 after being accused of sexually assaulting a nine-year-old girl in Oregon. Karow, who is wanted by Interpol, was able to remain in Israel, where he allegedly moved between different Jewish communities to avoid being exposed.

The most notable case in the public eye is that of Malka Leifer, who was the principal at the ultra-Orthodox Adass Israel School in Melbourne from 2003 to 2008. She fled to Israel after allegations came to light that she sexually abused pupils.
She has evaded deportation back to Australia ever since a formal request was received by Israel in 2014 by claiming mental illness. When the district court invalidated those claims, Leifer appealed to the Supreme Court.

Most recently in July, the Supreme Court heard an appeal by Leifer to try to overturn the lower court finding that she is mentally fit for extradition to Australia.

In May, after a close to six-year legal saga, Jerusalem District Court Judge Chana Miriam Lomp ruled that Leifer was mentally fit to stand trial on 74 counts of sexual abuse and rape of minors.

The Jewish ‘holy’ book The Talmud condones pedophilia, so it should come as no shock to anyone that Israel — and Jewish communities in America and Europe — are rife with pedophilia.

One rabbi has claimed that there is a literally ‘child rape assembly line‘ in many Orthodox communities.

And as we have previously reported — confirmed by this study — Jewish pedophiles worldwide emigrate to Israel to escape prosecution — so many that Israel has become a literal “safe haven” of for pedophiles on the run.

Of course, it isn’t just the religious Jews who promote pedophilia and protect them from prosecution — secular Jews, like Sigmund Freud, claimed that children are “sexual” even while still in the womb.

And with a straight face they will tell you that they have no idea why anyone would be ‘antisemitic’.