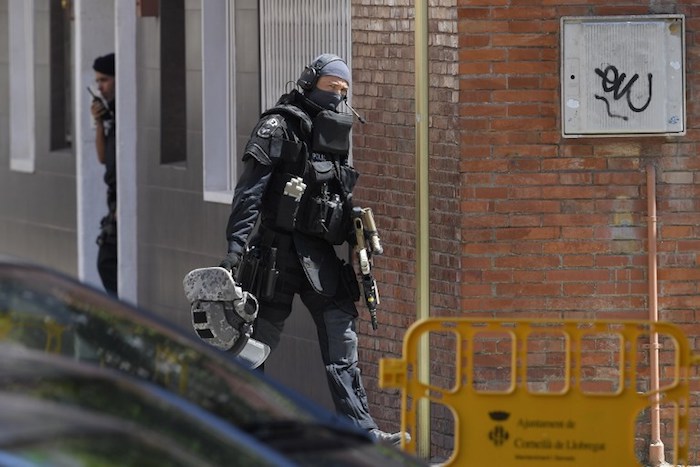 Everyday western Europe is being “enriched” by the “vibrancy” that only multiculturalism can bring — gang rapes, acid attacks, pedophilia — and now knife attacks by closeted homosexuals:

A man shot dead as he tried to attack a Spanish police station had come out as gay months prior and wanted to commit suicide, his wife said according to Spanish media.

The 29-year-old Algerian man, identified by media as Abdelouahab Taib, invoked the name of Allah during the assault early Monday morning in the town of Cornella de Llobregat in the region of Catalonia, which authorities are treating as a “terrorist attack.”

In her declaration to the Mossos d’Esquadra, Catalonia’s police force, his wife, a Spaniard who had reportedly converted to Islam after meeting him, said he had told her two months ago that he was homosexual, the region’s La Vanguardia daily and other media reported.

He reportedly felt “shame” about this as it conflicted with his Muslim religion, she said.

Then two weeks ago, she told him she wanted to divorce and she told police she suspected his attack was a suicide attempt, the daily said.

Neither the interior ministry nor the Mossos would comment on the reports.

Taib arrived at the closed police station in Cornella de Llobregat near Barcelona at 5:45 am (0345 GMT) on Monday and repeatedly pressed the buzzer to be let in, Rafel Comes, a commissioner with the Mossos d’Esquadra, told reporters.

After police allowed him in, the man pulled out a “large knife” and lunged at officers in “a clearly premeditated desire to kill an agent of our force,” Comes said on Monday.

“The officer used her gun to save her own life,” Comes said, adding the man shouted “Allah” as well as words the police officers did not understand.

“These are enough indication to treat the events being investigated as a terrorist attack.”

Of course, this report completely glosses over the fact that a White Spanish woman was involved in a race mixing relationship with this Muslim psychopath. One of the main purposes of flooding Europe with violent Arabs is also to eventually race mix the White race out of existence, and it appears that this woman was another unwitting dupe aiding in this subversive agenda.

Throughout White history, whenever we have allowed racial aliens to live among us, we end up worshiping their strange gods and creating race-mixed children who have no allegiance to our race or our God.

Today, we are repeating this destructive pattern, and the results are the same.  The answers are simple, not political.