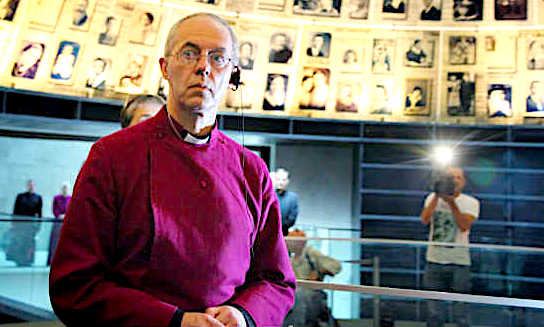 The Church of England, headed by Justin Welby, the jewish Archbishop of Canterbury, admitted Thursday that centuries of Christian anti-Semitism helped lead to the Holocaust:

In a major report that was three years in the making, England’s established church cited “the attribution of collective guilt to the Jewish people for the death of Christ and the consequent interpretation of their suffering as collective punishment sent by God” as being among the ideas that “contributed to fostering the passive acquiescence if not positive support of many Christians in actions that led to the Holocaust.”

The report, “God’s Unfailing Word: Theological and Practical Perspectives on Christian–Jewish Relations,” also urged Christians to accept the importance of Zionism for most Jews….

The Church of England stands at the center of the Anglican Communion, a worldwide network of churches. In England, it is the state church and headed by Queen Elizabeth II.

In an afterword to “God’s Unfailing Word,” the UK’s chief rabbi takes the church to task for failing to reject outright the work of evangelical Christians who attempt to convert Jews.

Ephraim Mirvis praises the 105-page report for being “sensitive and unequivocal in owning the legacy of Christianity’s role in the bitter saga of Jewish persecution.”

Mirvis goes on, though, to express his “substantial misgiving” at its unwillingness to condemn the “efforts of those Christians, however many they may number, who, as part of their faithful mission, dedicate themselves to the purposeful and specific targeting of Jews for conversion to Christianity.”

…The document is unflinching in its acceptance of the historic role of Christianity in perpetuating anti-Semitism. “Recognition on the part of the Church that it bears a considerable measure of responsibility for the spread of antisemitism demands a response from the Church,” it argues.

The report goes on to call for “attention to the persecution and prejudice experienced by Jewish people through history” and “the responsibility held by Christians for that and its persistence in the contemporary context.” Christian teaching, it admits, has provided a “fertile seed-bed for murderous antisemitism in the modern era.”

Quoting [Archbishop] Welby’s words in 2016 that the theological teachings of the Church have “compounded the spread of the virus” of anti-Semitism,” the report says “the attribution of collective guilt to the Jewish people for the death of Christ and the consequent interpretation of their suffering as collective punishment sent by God is one very clear example of that.”

“Within living memory, such ideas contributed to fostering the passive acquiescence if not positive support of many Christians in actions that led to the Holocaust,” it adds.

…“England had its own role in this history, with a claim to being the birthplace of what became known as the ‘blood libel,’ whereby Jews were falsely accused of murdering Christian children to make Passover matzot with their blood,” it says.

Two English cathedrals, Norwich and Lincoln, were associated with the development and spread of the blood libel in the Middle Ages.

Its first recorded instance was when a 12-year-old boy was found murdered outside of the East Anglian city of Norwich in 1144. Members of his family accused the Jews of Norwich of killing him.

The report notes that “this allegation, originating in England, became the catalyst for the murder of many Jews in this country and across Europe, especially in pogroms at Eastertide.”

In 1290, it also goes on to acknowledge, England “became the first country to order the entire Jewish community to leave, thereby seeking to be a Christian territory with no Jewish presence.”

The very nature of real Christianity is anti-jewish, and no amount of hand ringing, apologies, or changing of doctrine is going to change that.  Christ rejected the Jews and everything they stood for, and by demanding that today’s Christians embrace the Jews is tantamount to demanding that Christians reject Christ, which is exactly what the Jews want.

And Justin Welby was indeed appointed as the Archbishop of Canterbury because he is racially jewish and therefore would be far more sympathetic to throwing Christianity under the bus to placate the Jews, who will never forgive the English people for kicking them out of the country in 1290 for ritually sacrificing Christian children, a practice they continued to indulge in long after their expulsion.

Allowing the Jews back into England after 300 years in exile was the beginning of the end of Christian England.

But this announcement is part of a larger jewish game that’s afoot, which is to hold not just the Germans responsible for the so-called Holocaust, but the entire Christian European people, or Christendom.

The plan is to replace the suffering of Christ with the alleged suffering of the Jews during World War II.  Holocaustianity has replaced Christianity in the hearts of atheistic western Europeans, and their new overlords are ruthless jewish bankers. 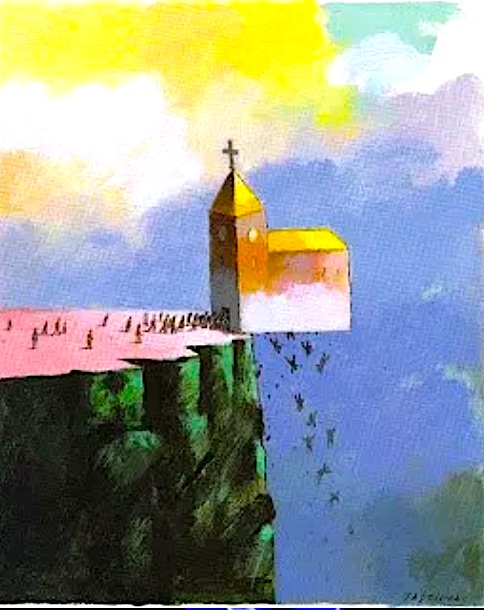