The Hidden Jewish Hand in the Destruction of White South Africa 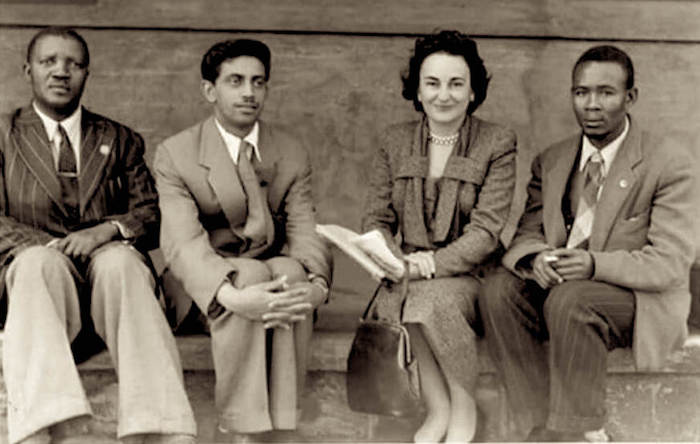 With no help from the mainstream media, one may still be generally aware of what’s presently happening in South Africa with Blacks brutally murdering White farmers on a regular basis.

But even in that, the situation may still appear to simply be a case where Blacks, on their own, somehow decided to civilize, organize, arm, and train themselves to overthrow the Whites, take over the government, and begin taking back “their” land.

However, thinking more deeply into these facile assumptions, you may be begin to realize how ridiculous they really are.

Could there have been others behind the scenes who were the masterminds and financiers of this long-term, incremental endeavor — what may better be called ‘the bolshevizing’ of South Africa?:

In the 1960s the government of Hendrik Verwoerd took power and implemented the formal separate but equal policies in South Africa. These policies made South Africa the economically strongest nation in Africa, and gave the blacks in South Africa (and the whites) the highest standards of living of any African nation.

Verwoerd’s policies had [one main opponent]….a Jew named Harry Oppenheimer [who] ontrolled banking monopolies in the country, and wanted “rights” extended to black South Africans for the purpose of extending their money lending business. Oppenheimer had ties to the Rothschild banking family and to the US CIA, which throughout the 1970s through 1990s supported the overthrow of white South African rule, at the direction of the Jew Henry Kissinger.

Oppenheimer lobbied the Rothschilds to overthrow Verwoerd, who had publicly denounced the Jewish banking monopolies in Parliament. The Rothschilds secured the support of the Rockefeller, Carnegie and other “Anglo” families in the United States, and had those institutions lobby against the white government. Rockefeller influenced the Council on Foreign Relations and its members in the US government in particular to oppose white rule.

In 1963 a group of Jews founded the “African” National Congress. The ANC was founded by Lionel Bernstein, Bob Hepple, Dennis Goldberg, Arthur Goldreich, Hazel Goldreich and James Kantor, with a few African front men — Nelson Mandela, Walter Sisulu, Govan Mbeki (father of Thabo Mbeki), Raymond Mhlaba, and Ahmed Kathrada. In this, the ANC followed the model the Jews established when they founded the NAACP in the United States, with the exception that the ANC was a much more violent and openly communist organization. These Jews and their African National Congress received funding and support from both the Soviet Union and the US CIA.

Just like with the American Civil Rights Movement, the Anti-Apartheid Movement was funded and coordinated by Jews who used a small group of Blacks as frontmen.

Clearly, the Blacks did not have the power or organizing capabilities to make such sophisticated institutional changes, but the jewish-controlled press has hidden the jewish role in the destruction of White Rule in South Africa, focusing all the blame on Black communists, while failing to mention that all the Black communists were trained and funded and organized by the Jews.

However, the powerful Rothschild interests also supported White Rule in the 1960s and 70s, not because they agreed with it, but rather they needed a stable South Africa to extract enough uranium from SA mines to funnel to Israel to help build their secret nuclear weapons program.

Once that was firmly established, the Rothschilds would then green-light the end of White Rule, using the murderous communist ANC as their proxies.

You can read more about the Jewish hand in the anti-Apartheid movement in South Africa in the book Rivonia’s Children by jewish author Glenn Frankel, who spins a very sympathetic view of their involvement.

Nelson Mandela, on many occasions, freely admitted the ‘enormous contribution‘ Jews made to the cause of his party, the ANC: