The Ignominious Jewish End To The Colossus Of Rhodes, One Of The Seven Wonders Of The World 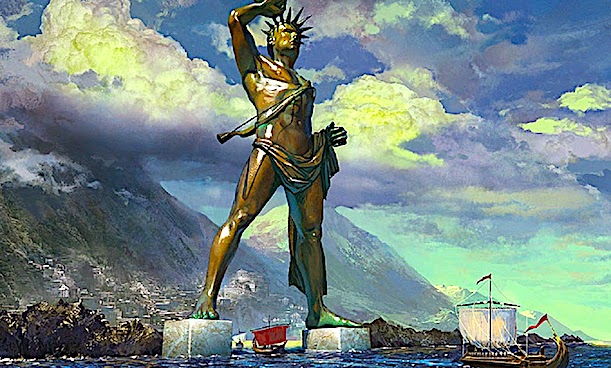 The Colossus of Rhodes was a gigantic 33-metre-high statue of the sun god Helios which stood by the harbour of that city from c. 280 BCE, one of the most important trading ports in the ancient Mediterranean. Made by the local sculptor Chares using bronze, the statue soon appeared on contemporary travel writer’s lists of must-see sights and was thus known as one of the Seven Wonders of the Ancient World:

The man commissioned with the Herculean task of sculpting the giant Helios was Chares of Lindus (a city on Rhodes). The project would not be finished until c. 280 BCE, and as the 1st-century CE Roman writer Pliny the Elder noted, it cost 300 talents and took at least 12 years to complete the bronze figure which stood some 70 cubits or 33 metres (108 ft) high. It is likely that the bronze outer shell, presumably applied in sheets and assembled on site, was supported by internal struts made of iron and certain pieces were weighted with stones to increase the figure’s stability.

…Unlike many other super-famous sculptures from antiquity, though, there are no surviving representations or scale models of the Colossus in other ancient art forms to help reconstruct in detail what the Colossus may have looked like. If the depictions of Helios on the Hellenistic silver coins of Rhodes are anything to go by, we can speculate that the statue may have had the god with his usual crown of pointed sunbeams.

The base of the statue carried the following inscription, preserved in the ancient anthology of poetry, the Palatine Anthology (VI.171):

“To you, Helios, yes to you the people of Dorian Rhodes raised this colossus high up to the heaven, after they had calmed the bronze wave of war, and crowned their country with spoils won from the enemy. Not only over the sea but also on land they set up the bright light of unfettered freedom.”

The exact location of the statue is not known as no ancient writer bothered to say, but the eastern side of the harbour is the most likely spot. Certainly, later Roman statues at ports like Ostia had statues near their harbours which may have mimicked the great example at Rhodes…

[A] tradition built up, perpetuated by oft-reprinted medieval drawings, that the giant figure stood astride the entrance to the military harbour, but the dimensions required for a figure in such a pose which allowed ships to pass underneath make it a highly unlikely possibility and contrary to all ancient sources on the statue’s dimensions…

The Colossus, along with many other structures on Rhodes, was toppled by an earthquake in either 228 or 226 BCE. According to the Greek geographer and writer Strabo (c. 64 BCE – 24 CE) in his Geography (14.2.5), the statue snapped at the knees and then lay forlorn and untouched because the locals believed the great oracle of Delphi’s prediction that to move it would bring misfortune on the city. Pliny the Elder made the following observations on the Colossus’ awesome aspect, even when in fragments:

“This statue fifty-six years after it was erected, was thrown down by an earthquake; but even as it lies, it excites our wonder and admiration. Few men can clasp the thumb in their arms, and its fingers are larger than most statues. Where the limbs are broken asunder, vast caverns are seen yawning in the interior. Within it, too, are to be seen large masses of rock, by the weight of which the artist steadied it while erecting it.” (Natural History, 34.18.41)

Around 654 CE, according to the Byzantine historian Theophanes (c. 758 – c. 817 CE), when Rhodes was occupied by the Muslims of the Umayyad Caliphate, a Jewish merchant from the city of Edessa in upper Mesopotamia bought the bronze wreckage of the Colossus to melt down and reuse the metal, transporting it to the East using 900 camels.

The fate of the Colossus of Rhodes is an apt metaphor for the decline and fall of the entire Near East and Levant — a series of great civilizations all built by White people, fall into corruption and die — then Muslims and Jews move in, live atop the ruins and pick the carcass clean.

This Jewish-Muslim alliance made its first inroads in Europe when the Jews of Visigoth Spain aided and abetted the Muslim invasion and domination of Iberia until the Reconquista pushed the Arabs out — but foolishly allowing the Jews to remain until their final expulsion under Ferdinand and Isabella.

And had not the Poles under Jan Sobieski, along with their cavalry of flying Husars, repelled the Turkish Ottoman invaders at the Gates of Vienna in 1683, all of Europe could very well have fallen to the infidels and their Jewish cheerleaders.

After their massive 9-11 terror attacks on America, which they blamed on their willing Muslim stooges, the Jews then flooded the decadent and degenerate White nations with Muslims, Africans, and assorted Third World flotsam and jetsam — the same strategy they’ve used for centuries.

And just like the Colossus of Rhodes, the World Trade Center met a similar fate, when Alan Ratner, the Jewish president of Metal Management — a metal recycling company in New Jersey — facilitated the selling off of the scrap iron from the wreckage of the Trade Centers to communist China — an ignoble and fitting end of the last White empire.