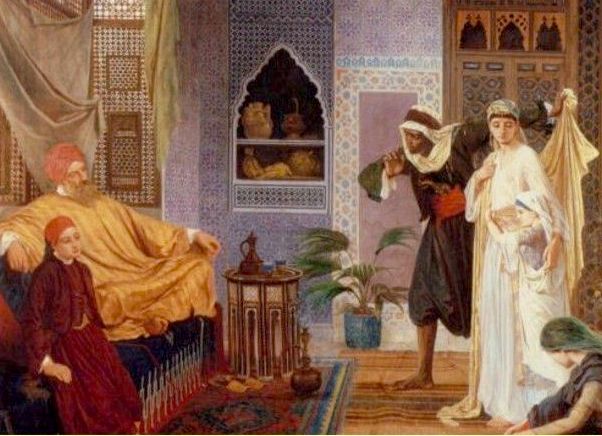 (Real Crusades History) To help legitimate today’s multiculturalism and diversity doctrines, modern historians have created a mythical history of Muslim Spain where Christians and their Moorish conquerors lived peacefully side-by-side.  Dario Fernandez-Morera, in his book The Myth of the Adalusian Paradise, strips away the veil created by these politically-correct modern historians to look at the real face of Muslim Spain based on contemporary, predominantly Arab sources:

What emerges is a hideous image of brutal aggression, consciously humiliating oppression, and intolerance on all sides (Muslim, Christian and Jewish). This book is not a diatribe against Islam. Rather it is a bitter and biting attack on Western historians who in their search for an example to justify their own fantasies about “multicultural harmony” inside Islam have ignored or consciously distorted the facts.

For example, Fernandes-Morera quotes the following passage from another contemporary historian: “It is important to understand that medieval Islamic civilization had a different attitude toward slavery than that seen in Western Europe. Slaves were much better treated and their status was quite honorable. Furthermore, there were many career opportunities open to a skillful mamluk [slave soldier], and the higher standards of living available in the Islamic Middle East, meant there was often little resistance to being taken [as a slave] in Central Asia and south-eastern Europe.” Fernandes-Morera replies: “One can certainly imagine the throngs of girls and boys in Greece, Serbia and Central Asia clamoring to be taken away from their families to be circumcised, to become sexual slaves, or to be castrated to guard harems as eunuchs, or, in other cases, to be raised in barracks with the sole purpose of becoming fearless slave-soldiers.”

Fernandez-Morera systematically debunks the allegations of a more “relaxed” Islam and multicultural equality. He does so by quoting Arab sources which (among other things) brag about the wholesale destruction of churches and the slaughter of Christian prisoners, praise the crucifixion of apostates, and texts advising Muslims how to collect the tax from non-believers. (Make them stand before Muslims sitting on a raised platform, call them “enemy of Allah” and then push them around for the amusement of any Muslim “who want[s] to enjoy it.”)

He also documents the extent to which Islamic Spanish society was dependent on slaves. For example, Abd al-Rahman had 3,750 slaves in his court, 6,300 sexual slaves in his harem, and 13, 750 slave soldiers. Furthermore, he notes that slaves were a major export of the kingdom, particularly eunuchs (castrated Christian males.) He documents the racism that characterized all blacks as fickle, foolish and ignorant and valued “white” slave girls at almost 15 times that of black slave girls.

Fernandez-Morera reminds readers that in Islamic Spain sharia law was the law of the land, and he goes into considerable detail on the specific form of sharia law applied, namely the Maliki school of Islamic jurisprudence. He points out that the Maliki school, far from being particularly liberal and tolerant, “is one of the more conservative schools, though not the most conservative — an honor that corresponds to the Habali school, predominant in the Arabian Peninsula.” (Fernandes-Morera, p. 96.)

Fernandez-Morera points out that Maliki sharia law included many niceties like female genital mutilation (even for adult sexual slaves), counted a woman as half a man, and banned musical instruments and singing altogether (as well as painting and sculpture, of course). The law even went so far as to order a man who bought a non-Muslim sex slave and discovered she was a singer to return her (p. 108).

Obviously, as Fernandez-Morera admits, the elites in Muslim Spain (as all over the world) often ignored the law. Non-Muslim slave singers and dancers are tolerated and even coveted. However, he is right to remind his readers that lapses in the application of law do not constitute a positive culture–much less a shining example of “paradise.”

There is no credible example in all of history where a multicultural society, which included a significant population of Whites, ever succeeded.

And there could not be two less compatible ideologies than Christianity and Islam — except perhaps Christianity and Judaism, but that shouldn’t be surprising considering that Islam was the brainchild of Jewish scribes.

And the idea that these ideologies can live peacefully side-by-side in the same country is the height of absurdity.

And it cannot be emphasized enough that the Jews in Spain aided and abetted the Muslim takeover over 1,000 years ago just as they are doing today.

Despite certain conflicts, Jews have been very successful in manipulating Muslims into doing their bidding, which has often involved subverting Christian societies, whether it was the Byzantine Empire or early Christian Spain.

And just because Jews can get along with Muslims doesn’t mean that Christians should ever strive to do the same.