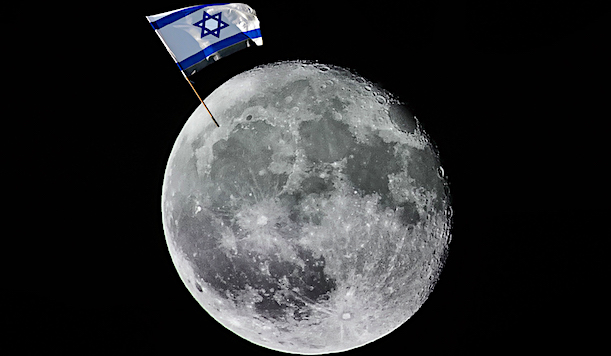 Back in the 1970s, the Jewish-Israeli press reported that for some unexplained reason, Apollo 11 astronaut, Neil Armstrong, carried a small Israeli flag with him all the way to the moon and back — and that it was ultimately presented as a gift to the Israeli President on behalf of President Richard Nixon:

At a short ceremony on April 19, 1970, Israel received a rare gift – two pieces of the moon brought back on the successful Apollo 11 mission to the lunar surface, which was headed by Buzz Aldrin and Neil Armstrong in July 1969.

The rocks were presented at the time to Prime Minister Golda Meir and President Zalman Shazar by U.S. Ambassador Walworth Barbour on behalf of U.S. President Richard Nixon, but when it came to dusting them off recently as part of the 50th anniversary celebrations for the moon landing, no one actually seems to know where they are.

But it’s not just the Israelis that are desperately seeking their little pieces of the moon.

Officials all across the globe – and even in the U.S. itself – are hunting for the hundreds of moon rocks handed out as gifts to to world leaders and American governors.

Of the two rocks presented to Israel in 1970, one was placed in container, sealed with a glass lid, and put on displayed at the Eretz Yisrael Museum in Tel Aviv.

A small Israeli flag taken into space by the American Aldrin and Armstrong was returned along with the rocks, as well as a letter from Nixon reading: “This flag of your nation was carried to the Moon and back by Apollo 11 and this fragment of the Moon’s surface was brought to Earth by the crew of that first manned lunar landing.”

The second moon rock was given to Prime Minister Golda Meir.

Several years later, in July 1973, a third piece of the moon – from the Apollo 17 mission – was given to President Efraim Katzir. This was the last manned Apollo mission to the moon.

So where are Israel’s moon rocks today? The Justice Ministry, which is responsible for cataloging all gifts given to the state says: “The Civil Service Law (Gifts) wasn’t enacted until 1979, therefore, gifts given to public employees were not transferred to the custodian general.”

No one in the President’s Residence in Jerusalem or in any other government ministries seems to know where the three rocks are. The United States Embassy in Jerusalem didn’t respond a request on the subject from Ynet.

Oddly, a story that appeared in the Jewish Telegraphic Agency circa 1974 claimed that the Israeli flag was on Apollo 17, but made no mention of the flag on the previous Apollo 11 mission:

A tiny piece of moon rock brought back by the final Apollo mission and a small Israeli flag which the American astronauts carried to and from the moon were presented to President Ephraim Katzir yesterday as a gift from President Nixon. The presentation was made by the U.S. Charge d’affaires Owen Zurhellen at the President’s residence here.

Zurhellen conveyed Nixon’s request that the moon fragment be displayed at an Israeli museum. Katzir said such an exhibition was under consideration. The Israeli President, who is a scientist, described the moon rock as “a symbol of American scientific genius and achievement.” He said he did not know of any accepted formula for expressing thanks “for receipt of a piece of the moon,” adding, “It’s quite an extraordinary gift.”

Leaving aside the evidence that the Apollo moon missions were faked, this story raises many interesting questions.

Whose idea was it that Neil Armstrong should be carrying an Israeli flag for this historic mission to the moon?

And whose idea was it to allegedly have the Israeli flag again on Apollo 17, the last manned mission to the moon?

It’s not as if the U.S. and Israel had a close, stable ‘friendship’ in 1969, barely two years after the Israelis intentionally attacked the U.S.S. Liberty in a vain false flag attempt of drawing the U.S. into their war with Egypt.

And it is highly unlikely that it was Richard Nixon’s idea, considering he had a well-deserved distrust of Israel — and of Jews in general — and the Israelis knew how he felt.

In fact, Nixon’s Vice President, Spiro Agnew, believed that pro-Israel Jews were behind the campaign to force him to resign.

According to Michael Collins Piper, in his book, Final Judgment, one of the first things Nixon requested from J. Edgar Hoover when he took office was, “Get me the files on Israeli nuclear espionage.” (p. 364)  And given Hoover’s close relationship with the ADL, there can be little doubt that Nixon’s unhealthy interest in that subject immediately raised some red flags in Tel Aviv.

In 1973, Nixon went behind the back of the Israelis to make an alliance with King Feisal of Saudi Arabia in an attempt to resolve the Israeli-Palestinian conflict.  It was this ‘stab in the back’ that, according to Piper, lead the Mossad to orchestrate the Watergate break-in in order to bring about the political downfall of Nixon. (Final Judgment, p.366)

Another strange twist is that it was John F. Kennedy’s goal for the Apollo program to put a man on the moon, and considering the overwhelming evidence that the Israeli Mossad was behind the JFK assassination, the very idea that Neil Armstrong was carrying an Israeli flag to the moon, on a mission dedicated to JFK, makes it even more improbable and symbolically troubling.

It’s worth noting that during a 1974 interview with Walter Cronkite, notorious exiled international financier, Robert Vesco claimed that “the forces that threatened me are the same politically that eliminated President Kennedy and then President Nixon and want to eliminate all of Nixon’s associates.” (Final Judgment, p. 367).

What did the liberal Kennedy and the conservative Nixon have in common?  They both crossed Israel.